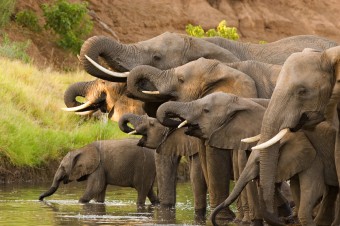 It is obviously impossible to say that elephants never forget anything- and it seems likely they do forget things- but studies have shown that elephants do have exceptionally long memories for certain types of things.

For instance, in 1999, an elephant named Jenny was living at The Elephant Sanctuary in Hohenwald, Tennessee. When she saw an Asian elephant named Shirley, who was new to the sanctuary, she became excited and anxious. After they were given a bit of time together, Shirley also became animated. Founder Carol Buckley described “an emotional reunion” between “two seemingly old friends.” The two elephants began trumpeting, and Buckley said she had never witnessed something that intense unless it was aggression.

Turns out, the two elephants really were old friends. They had both performed together for a few months in Carson & Barnes Circus. The clincher? They had last seen each other twenty-three years before their reunion at the sanctuary.

This excellent recall power, whether it be remembering a face or events that happen in the wild, is thought to be a huge part of how elephants survive outside of captivity. Elephants typically live up to eighty years in the wild and form family structures headed by a matriarch. The matriarch is typically one of the oldest female elephants in the group and is thought to have the best memory—though she also could simply be the most experienced.

How does this help in survival? One study by researchers from the University of Sussex showed that when presented with a stranger, elephants with a 55-year-old matriarch were more likely to huddle in a defensive position than elephants with a 35-year-old matriarch. The older elephants were more likely to have had an experience with a stranger who had started a conflict with a herd before and remembered what needed to be done to warn the stranger off or defend themselves.

In 1993, researchers studied three herds of elephants in Tanzania’s Tarangire National Park during a particularly severe drought. Two herds left the park when the resources dried up—each of those groups had matriarchs aged between 38 and 45. The herd that stayed in the park had a matriarch aged 33. Of the sixteen calves who died during the drought, ten were in the third, younger group alone. It was discovered that there had been another severe drought in the area in 1958-1961, meaning the two older matriarchs would have been at least five years old at the time and likely remembered the event and where to go when the usual food and water sources dried up, while the younger matriarch wasn’t old enough to remember and didn’t know where else to go.

Scientists haven’t been able to measure exactly how smart an elephant is, but they have been able to measure an elephant’s EQ, or encephalization quotient. This measures the size of an animal’s brain against the size scientists project it would be based on body weight. Elephants have one of the biggest brains, coming in at an average of 10.5 pounds, dwarfing a human’s 3-pound brain. However, humans typically have an EQ around 7, while elephants have an EQ of around 1.88. To compare, chimpanzees usually score around 2.5, and pigs have the low score of .27.  Using this method, elephants rank among the smartest creatures in the animal kingdom.

Elephants are also among an exclusive circle of animals that recognizes their reflections in a mirror. Further, the olfactory region of their brains—the one that recognizes smells—is particularly active (those big noses must be good for something, right?). Using their sense of smell alone, elephants have been tested to recognize as many as thirty female relatives based on the scent of their urine, regardless of the amount of time it’s been since they last saw, or in this cases, smelled them- which is saying something for creatures that live so long. Similarly, elephants show signs of grief when they encounter the corpse or bones of a deceased relative. In one study, scientists presented an array of objects to a family of elephants; they reacted most when presented with the bones and tusks of a deceased relative.

The smell and face of family members and the locations of feeding grounds are the most prominent things that an elephant seems to remember, among other survival skills. And, it is clear their memories can stretch over decades, aiding in their ability to survive for their relatively long lifespans. So to say an elephant “never forgets” is an exaggeration, but they do seem to have exceptional memories for certain things nonetheless.