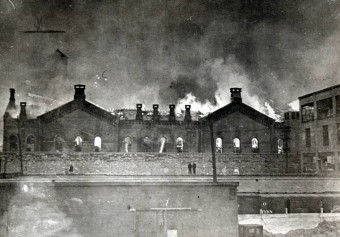 On April 21, 1930, a fire at the Ohio State Penitentiary killed 320 inmates, many who died trapped in their cells, unable to escape the flames. Those that didn’t burn to death perished from smoke inhalation and breathing poisonous fumes. It was the most lethal prison fire in American history.

The prison itself was a wretched hell-hole, crammed with 4,300 prisoners in a structure designed to hold only 1,500. An expansion was being built, and scaffolding was set up on the outside of one section of the building called the Big Block. This is the area that caught fire when a candle ignited a pile of oily rags just after the prisoners had been locked into their cells for the night.

It was the Depression, and many of the prisoners were incarcerated for minor crimes committed out of desperation to feed their families, which explained the massive over-crowding. Each cell door had to be locked and unlocked manually, leaving many men begging for release that would never come.

The prison warden took off to save his own hide, but his daughter stuck around to administer aid to injured and dying prisoners in the main yard. Two prisoners managed to wrestle keys from a do-nothing guard and saved the lives of many fellow inmates and corrections officers, becoming the most unlikely of heroes.

Why the fire was started was disputed in the aftermath of the tragedy (there was no debate as to the cause of fire.) Prison officials stated that three inmates started the blaze to create a diversion in order to make an escape attempt. In the months following the fire, two of the three prisoners accused of setting the fire committed suicide, which some speculate lends some weight to the prison officials’ claim.

Others involved believed the fire had been a horrible accident, and the authorities at the prison blamed the inmates to deflect blame from the administration’s poor handling of the situation.

In the end, the fire killed more people than the Great Chicago Fire of 1871 (see: How Did the Great Chicago Fire Start?) and the Shirtwaist Factory Fire in New York City, but very few people have heard about the tragedy that occurred on April 21, 1930. Dr. Mitchell Roth of the College of Criminal Justice, who has done extensive research on the fire, states:

There are a lot of books about a lot of disasters in the country, yet the prison is left out of most anthologies featuring major disasters. I don’t know why. Perhaps it is because the public thought they were less worthy to document than others because they were prisoners.