Why the Week Starts on Sunday

March 11, 2015 Melissa
Karla S. asks: Why does the week start on Sunday? Why not Wednesday or Friday? 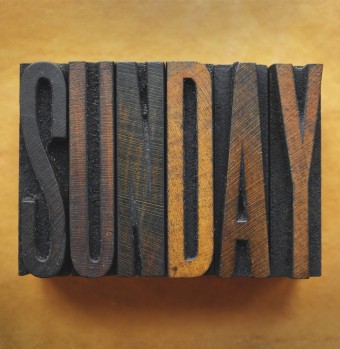 As with so many things passed down to us from antiquity, religion is the reason the calendar week starts (for many of us) on Sunday.

The first day of the week (for many), Sunday has been set aside as the “day of the sun” since ancient Egyptian times in honor of the sun-god, beginning with Ra. The Egyptians passed their idea of a 7-day week onto the Romans, who also started their week with the Sun’s day, dies solis. When translated into early German, the first day was called sunnon-dagaz, which made its way into Middle English as sone(n)day.

For some in the Christian tradition, the first day of the week is named in accordance with the creation tale in the first book of the Bible, Genesis, where one of the first things God did was say “let there be light, and there was light.”

Not every culture has Sunday as its first day, and notable exceptions are found in the Slavic languages, where Sunday is the last day of the week and is not named in honor of the sun. For example, in Hungary Sunday is called Vasárnap and means “market day,” and in Old Russian, where Sunday was sometimes called “free day.”

Monday, as you may expect, was named after the moon. In Latin, it was known as dies lunae (day of the moon), and this made its way into Old English as mon(an)dæg and the monday in Middle English. It is said that in early pagan traditions, Monday was dedicated to the goddess of the moon, although in some Christian traditions, assigning the moon to the second day also follows the story of Genesis, where in between the first and second days, darkness was separated from light and “evening came.”

Note that Monday is the first day of the week in the Slavic languages, and in the Chinese calendar, Monday is xīngqīyī, “day one of the week.”

Tuesday has always been dedicated to a war god, and in ancient Greek, it was known as hemera Areos (day of Ares), modified only slightly by the Roman dies Martis (day of Mars), and later in Old English Tiwesdæg, in honor of a Norse god of war and law, Tiwaz or Tiw.

Early on, Wednesday was dedicated to the messenger of the gods, and for the Greeks, it was known as hemera Hermu (day of Hermes), then to the Romans as dies Mercurii (day of Mercury). When it was adopted by the Anglo-Saxons, as Mercury’s areas of expertise overlapped with his, they dedicated the day to Odin, Woden in Old English (calling the day wodnesdæg).

Jupiter was awarded the fifth day, dies Jovis, by the Romans, and it was assigned to Thor by the Norse, where it was originally called thorsdgr, later modified by Old English into thurresdæg, and then into Middle English’s thur(e)sday.

For many the best day of the week, Friday was, fittingly, assigned to Aphrodite and Venus (in Latin dies Veneris). In Old Norse and English, Venus was associated with Frigg, a goddess of knowledge and wisdom. By Old English, the day’s name had been modified into frigedæg (Frigg’s day) and by Middle English, to fridai. (Notably, TGIF, for Thank God It’s Friday, dates back to 1946.)

The last day of the week for many, Saturday historically was dedicated to Saturn (Cronus to the Greeks), Jupiter’s father and a god associated with dissolution, renewal, generation, agriculture and wealth. In Latin, the day was originally called dies Saturni, which was transformed into sæter(nes)dæg in Old English and saterday in Middle English.

Notably, for some religions, Saturday, not Sunday, is celebrated as the weekly day of rest, known as the Shabbat in Judaism and Sabbath for Seventh Day Adventists.