This Day in History: March 27th- Rejecting an Oscar 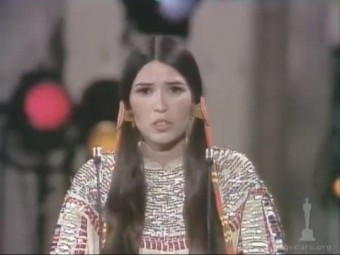 In one of the most memorable, if controversial, moments in Academy Award history, iconic actor Marlon Brando refused a best actor Oscar for his role in “The Godfather.” Brando sent Sacheen Littlefeather, a 26-year-old aspiring actress in his stead. Attired in full Apache dress, Littlefeather explained that Brando could not accept the award due to “the treatment of American Indians today by the film industry.”

Brando had given Littlefeather a 15-page statement to read, but Oscar officials told her to keep it at 60 seconds or risk arrest. Calm and polite, she explained that Brando could not accept the award because of Hollywood’s negative portrayal of American Indians in film and TV, and the recent events at Wounded Knee, where Oglala Lakota activists were under siege by the US military.

A few boos greeted her words as she began her short speech, but even more clapped to offer her encouragement. John Wayne, who made an entire career from making the sort of movies Marlon Brando was deriding, was so incensed he had to be physically restrained from storming the stage and attacking Ms. Lightfeather. Where have all the cowboys gone indeed.

The rest of Brando’s speech was published in the New York Times. The final paragraph read:

I would hope that those who are listening would not look upon this as a rude intrusion, but as an earnest effort to focus attention on an issue that might very well determine whether or not this country has the right to say from this point forward we believe in the inalienable rights of all people to remain free and independent on lands that have supported their life beyond living memory. Thank you for your kindness and your courtesy to Miss Littlefeather. Thank you and good night.

It was Sacheen Littlefeather who bore the brunt of any negative backlash from Brando’s Oscar night political statement. First, her true ethnicity was called into question when it was discovered her birth name was Marie Cruz. A little more digging revealed that although her mother was white, her father was Apache and Yaqui. She had changed her name when she became interested in her heritage.

Between the Oscar ceremony and some nude photos published in Playboy, her fledging acting career was over before it started. She became a health-care advocate for the Native American community, and worked with Mother Teresa caring for AIDS patients. She was interviewed in 2013 and insisted that, “Now I am in a place of being a healer, if you will, of my own journey.”