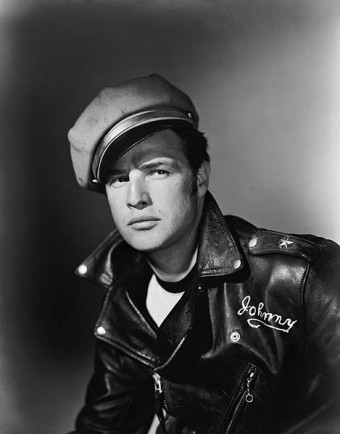 He is one of the most admired actors in the history of the movies. Marilyn Monroe called him “the sexiest man” she had ever seen. And if you watch his early, incredible performances in “On the Waterfront” (1954), “Streetcar Named Desire” (1951), “The Wild One” (1953), “The Men” (1950), and my favorite Brando film “Guys and Dolls” (1955), you can see an almost-perfectly proportioned, sleek-looking, brilliant actor.  But even in these very early days of his movie career, the great Marlon liked his chow.

Actor Richard Erdman, a fellow actor in “The Men” (Brando’s first film), says Marlon’s diet at the time consisted of “junk food, take out, and peanut butter”, which he consumed by the jarful.  By the mid-fifties, Marlon had become renowned for eating boxes of Mallomars and Cinnamon Buns, and washing his sweet treats down with a quart of milk.

Close friend, Carlo Fiore, said Marlon would go on extreme crash diets in the fifties and sixties, but then would lose his willpower.  He would subsequently gorge on huge breakfasts consisting of corn flakes, sausages, eggs, bananas and cream, and a huge stack of pancakes drenched in maple syrup.  (One of Brando’s nicknames for himself was “Branflakes”.)

Carlos Fiore would be dispatched by Brando’s directors to fetch him out of local coffee shops.  Kark Malden, a close friend, said that during the shooting of “One Eyed Jacks” (1961) Brando would eat “two steaks, potatoes, two apple pies a la mode, and a quart of milk” for dinner.  This diet necessitated the constant altering of his costumes during filming.  Because of this, at his birthday party that year, the crew gave Marlon a belt as his present with the card, “Hope it fits”.  His birthday cake was labeled “Don’t feed the director” (Brando was the director of “One Eyed Jacks”).

His second wife, Movita, actually put a lock on the house refrigerator.  But when she awoke one morning, the lock was broken and Marlon’s teeth marks were found on a round of cheese.  The house maid told Mrs. Brando that Marlon made nighttime raids on the icebox routinely.

Brando also loved to frequent hot dog stands late at night, particularly the L.A. hot dog joint Pink’s at 3 and 4 o’clock in the morning, where he’d wolf down as many as six hot dogs at a time.

Not surprisingly from these gorge-fests, the costumer on “Mutiny on the Bounty” (1962), James Taylor, claims Brando split 52 pairs of pants during the shooting of the film, due to his wild swings in weight.  This necessitated a stretch fabric be used on his wardrobe replacement clothes. He split these pants too.  During this time, Marlon was also once observed taking a 5-gallon tub of ice cream and rowing himself out in the lagoon to indulge himself.

On the set of “The Apaloosa” (1966) Marlon’s double once had to be used in long shots simply because Marlon had eaten one of his gorge-fest lunches.

Dick Loving (yes, that really was his name), who married Marlon’s sister, Frannie, said Marlon would eat “two chickens at a sitting and (go) through an entire Pepperidge Farm cookies [package]”.

In what was possibly Marlon’s strangest eating exploit, it was reported that during the filming of “Missouri Breaks” (1976), he fished a frog out of a pond, took a bite out of it, and put it back in the drink… when you’re hungry, you’re hungry I guess.

Before filming “Apocalypse Now” (1979), Marlon devoutly promised to lose weight, but he just couldn’t do it.  Subsequently, his character is shown in the shadows for much of the film to hide his Buddha-like belly. A 6′ 5″ double was used in long shots by director Francis Ford Coppola to “give the character more stature”.

By the 1980s, it was reported that one of Brando’s girlfriends had left him because he wouldn’t keep his promise to lose weight.  He always seemed to be dieting, but the pounds weren’t coming off much. Unknown to her, he had some of his buddies throw bags of Burger King Whoppers over the gates of his Mulholland Drive estate.

Later in the ’80s, Marlon was routinely spotted at a Beverly Hills ice cream parlor buying five gallon containers of ice cream- which he would eat all himself.  Reportedly, one of his favorite “snacks” around this time was a full pound of cooked bacon placed in an entire loaf of bread. During these years, the 5′ 10″ Marlon’s weight would balloon up to an incredible 350 pounds at one point.

Towards the end of his life, when his life was obviously in danger from his over-eating, Marlon did make a last-ditch attempt to drop some excess weight by going on a bland diet.  At one point he did drop 70 pounds. But his heart, his liver, and his body in general were already severely damaged by his over-eating habits and frequent crash diets.

Possibly only Elvis Presley and Orson Welles, among show biz and movie legends, liked to indulge in over-eating as much as the great Marlon Brando.  And right up to the end- which, sadly, finally came on July 1, 2004 (he was 80), Marlon never lost his great love of food, especially his beloved ice cream.