This Day in History: March 12th- A Wedding and a Drug Bust 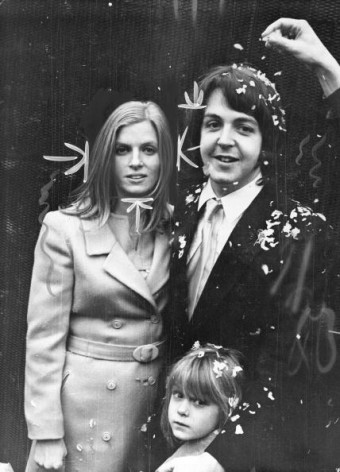 March 12, 1969, was a busy day in the Land of Fab Four. Paul McCartney, the last bachelor Beatle, married his girlfriend Linda Eastman, while George and Pattie Harrison were paid a visit by the Drugs Squad.

One of the most enduring marriages in rock began, after a night of intense arguing according to the groom, at the Marylebone Registry Office in Westminster. The weeping fans outside may have been mourning the loss of the cute Beatle, but the Beatles would soon be no more. None of Paul’s bandmates were present as he and his new wife took their vows.

The couple tried to keep the event a secret, but despite their efforts crowds of fans and reporters turned up to get a glimpse of the newlyweds. Paul and Linda entered the building through a side door to avoid most of the throng and then twiddled their thumbs for an hour waiting for McCartney’s brother Mike, whose train had broken down.

Right around the time Paul was slipping a $12 ring purchased the previous evening on Linda’s finger, the police arrived at Kinfauns, George and Patti Harrison’s home in Esher, Surrey.

Leading the raid was the notorious Sgt. Norman Pilcher, who made it his business to target rock stars with over-zealous drug raids (Brian Jones of the Rolling Stones was a special favorite of his.) Pilcher was so thorough that he would bring his own stash in case the musician in question happened to be fresh out. He reveled in the second-hand fame busting such luminaries as Mick Jagger, Keith Richards, Eric Clapton, and John Lennon brought him.

Pilcher, class act that he was, deliberately picked the day of Paul’s wedding to raid George’s home believing no-one would be there. George was out, but Patti was there when about ten cops and a police dog turned up to ransack their belongings. Patti called George immediately.

Incredibly, the cops had the nerve to act like fanboys and asked Patti if her husband was making any new music. They lounged around, watching her TV while Patti was tailed by a policewoman who said she was not to let Patti out of her sight. One of the cops requested that Patti make him a cup of tea. She refused, and the policewoman made it instead.

Not surprisingly, Sgt. Pilcher triumphantly proclaimed he’d discovered a block of hashish. George arrived home and the policemen went full-on Beatlemaniac, all jockeying to get closer to Harrison until it became clear that Pilcher was going to milk this for all it was worth and make the Harrisons do a perp walk.

Pilcher made sure to bring along the hunk of hash as “evidence.” He claimed they found it in one of Harrison’s shoes. George immediately cried foul. “I’m a tidy man. I keep my socks in the sock drawer and stash in the stash box. It’s not mine.”

The Harrisons eventually were found guilty of cannabis possession and fined.

Sgt. Pilcher’s reign of terror ended when he was found guilty of perjury and, ironically, served far more time in jail than all of his high profile victims combined. Instant Karma’s gonna get you Norman.