Operation Upshot-Knothole, Atomic Annie and the Irradiating of America 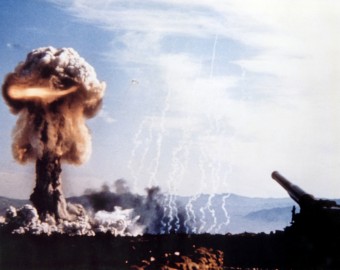 From the first Trinity test in Alamogordo, New Mexico on July 16, 1945 until a unilateral moratorium was declared on October 2, 1992, the United States conducted hundreds of nuclear tests around the globe and in the lower 48. Early on, nearly all of these nuclear devices were detonated above ground, including those tested between 1952 and 1958 at the Nevada Test Site (NTS). (See: Why is it Called Area 51?)

Atmospheric testing in the continental U.S. began with Operation Ranger (January-February 1951) and was soon followed by Operation Buster-Jangle (October-November 1951) and Operation Tumbler-Snapper (April-June 1952). While these early tests were primarily focused on evaluating weapon design, function and capacity, by the time the Atomic Energy Commission (AEC) and Department of Defense (DOD) got to Operation Upshot-Knothole (March-June 1953), they were ready to assess the effects that nuclear blasts had on their surroundings, and especially, people.

Atomic Annie was the first of the Upshot-Knothole tests. On March 17, 1953, the 2,700 lb. girl was hefted 300 feet up a detonation tower erected in Yucca Flat, Area 3 of the Nevada Test Site. Twelve kilometers (7.5 miles) to the south, approximately 600 civil defense personnel and reporters observed the explosion from News Nob, a site set up for the express purpose of showing the public they had nothing to fear from weapons testing.

Closer to ground zero, nearly 1,200 soldiers (mostly from the Sixth Army) along with 20 reporters were stationed in trenches dug approximately 3.2 km (almost 2 miles) southwest of the drop tower. Between these trenches and the bomb, engineers with the 412th Construction Battalion had erected bunkers, foxholes and other obstacles, and personnel with the 2623rd Ordnance Company had also put military equipment in that zone; all to measure the bomb’s impact.

Having assembled in the dark, at the appointed time the troops hunkered down in the trenches, closed their eyes tight and covered their faces with heavy leather, wool-lined gloves. At 5:20 a.m. (PST), the 16 kilotons (Kt) Annie detonated when she was dropped from the tower.

After detonation, some of the trench troops were sent on maneuvers to attack an “objective” a mere kilometer (0.62 miles) from ground zero; other ground troops were airlifted to a slightly more distant site by a handful of Marines in helicopters who were measuring the bomb’s after-effects on both man and machine.

A seventh tower test, Harry (32 Kt), was conducted at Area 3 on May 19th, and it is notable for (among other things) having contributed more than one-third (30,000 person-roentgens) of all the gamma-ray contamination caused by all of the 1950s NTS tests.

As you can imagine, all of these nuclear explosions spewed a fair amount of radioactive material into the atmosphere. According to one report, “85,000 person-roentgens of external gamma ray exposure,” were produced by the 1950s tests.

For years, most Americans assumed that this contamination was limited to areas around the NTS. Also, as you might expect, soldiers and others who participated in the experiments suffered from radiation-related conditions, including cancer.

Shockingly, however, in 1997, a Senate Committee revealed that AEC and DOD personnel had been aware since the beginning that radioactive isotopes from NTS atmospheric tests were routinely spreading across the country. While discussing a report prepared by the National Cancer Institute (NCI), the senators finally informed the nation that frighteningly high levels of Iodine-131 (just one of the 19 different types of radioactive isotopes produced by the experiments) had made it to many states across the West and Midwest, and even as far away as Vermont.

Radioactive iodine accumulates in the thyroid, often leading to cancer. Although it has a very short half-life of only 8 days, since most of it fell on vegetation, and in particular, pasture grasses that were eaten by cows, a lot of it got into the U.S. milk supply. The amount of I-131 contamination was so high, in fact, that at least 11,300, and perhaps as many as 212,000, U.S. thyroid cancers were directly attributable to the NTS atmospheric tests.

Some of the other radioactive materials released, including Strontium-90 and Cesium-137, have significantly longer half-lives (28.5 years and 30, respectively) and both are known to also contribute to cancers. These bone-seeking radionuclides, and in particular Sr-90, are linked with cancers like leukemia, and the CDC estimates that 1,100 leukemia deaths were attributable to the NTS test; this is on top of another 9,500 or so other cancers that are also presumed to be traceable to NTS fallout.