March 27, 2015 Karl Smallwood
Keith D. asks: I was just wondering who came up with the expression “This ain’t my first rodeo”? 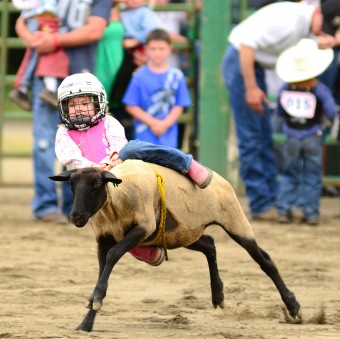 For the uninitiated, “This ain’t my first rodeo” is roughly equivalent to telling a person that you’re more than prepared for a given situation or that it offers little challenge to you. It’s more often than not used derisively, usually in situations where a more experienced person is being given unwanted or unwarranted advice by someone else. The phrase is similar in inclination to the British idiom, “I didn’t come down with the last shower” (shower in this context referring to rain), or the expression, “I wasn’t born yesterday”.

As to the origin of the expression, it would seem it isn’t nearly as old as you might think. The earliest known documented utterance of it was in the 1981 film, Mommie Dearest, a film adaptation of a book of the same name chronicling the life of famed actress and dancer Joan Crawford. The book was a somewhat controversial tell-all memoir written by Crawford’s deceased fourth husband’s daughter, Christina Crawford, where she portrays Joan Crawford as something of an especially wicked step-mother.

A version of the phrase is uttered by the actress playing Crawford in a particularly well acted scene in which she is informed by the Pepsi board of directors that she is going to be forcibly removed from the board. In response, Crawford verbally threatens everyone present by stating she will publicly slam the company and its product in an attempt to bring it down if they remove her from the board. When a board member tries to reason with Crawford, she angrily yells: “Don’t fuck with me fellas! This ain’t my first time at the rodeo.”

While it is certainly true that the real-life Crawford was on the board of directors for Pepsi after the untimely death of her husband, the then president of the company, Alfred Steele, and it also true that the board threatened to remove her, there is little evidence that Crawford ever uttered the line in real life. However, it hasn’t stopped the quote from being attributed to Crawford time and time again.

In reality, as far as documented evidence goes, the quote should either be credited to Faye Dunaway, who played Crawford, or one of the film’s writers, though which of them came up with the line and how has seemingly never been asked directly. Of course, it’s now 34 years later, so it would be a wonder if they remembered the details accurately, or at all, concerning how that seemingly insignificant line was thought up or who they borrowed it from, if that’s the case.

In any event, nine years after the release of Mommie Dearest, the country singer Vern Gosdin released a song simply titled “This Ain’t My First Rodeo”. The song was reasonably successful and is often credited as the source of the expression, but in reality simply went a long way towards popularising it. According to Vern, he first heard the phrase after complimenting a couple of carpenters working in his home on their work, at which point one of them dryly responded “this ain’t our first rodeo”. The phrase intrigued Vern so much that he jotted it down and later turned it into the song.

Other’s credited with bringing the phrase to popular attention include NASCAR driver, Darrell Waltrip, who is recorded as having said it in 1983 during a post-race interview, and a Southern University coach named Gerald Kimble who used it in 1989.