This Day in History: March 9th- Lilli and Barbie 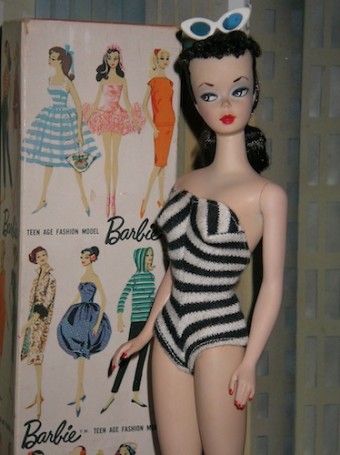 The First Barbie, Sold in Blonde and Brunette

“My whole philosophy of Barbie was that through the doll, the little girl could be anything she wanted to be. Barbie always represented the fact that a woman has choices.” – Ruth Handler, creator of Barbie

On March 9, 1959, the American Toy Fair in New York City had the distinction of being the debut venue for Barbie, the best-selling doll in history. From the reactions of at least half of the buyers at the toy fair, you’d have never guessed the toy’s future global domination. After all, this doll was the first consumer doll meant for kids that was modeled after an adult, rather than a baby or toddler. Not everyone was ready for a doll meant for kids that had breasts and a come-hither expression, not unlike novelty adult blow-up dolls.

This comparison isn’t as far-fetched as it seems because Barbie’s bodacious bod was based on another doll named Lilli, itself inspired by a German comic book character. The doll was originally sold, not for kids, but in tobacco shops as a naughty gag gift for the guys. Once the obligatory jokes were made and the fellas tired of Lilli, the kids had a blast playing with the dolls.

Ruth Handler, who owned the Mattel Inc. toy company along with her husband, Elliot, bought the rights to the Lilli doll when she cooked up the idea to market an adult doll of her own. The idea for Barbie came to Ruth as she observed her daughter Barbara and her friends play with their paper dolls. They envisioned them as college students, cheerleaders, or adults in a variety of different careers.

Ruth believed this sort of play was a constructive way for kids to experiment with adult roles from the safe distance of childhood. She also saw the gaping hole in the market and decided to fill that niche with an adult fashion model doll called Barbie, named after her daughter who provided her with the inspiration for the toy.

Despite the doubts of those at that first toy fair, Barbie proved immensely popular. Mattel became a sponsor of “The Mickey Mouse Club” TV program in 1955, which helped sales soar. Barbie was so popular that by 1961, they gave her a boyfriend named Ken (after Handler’s son.) Barbie’s BFF Midge and kid sister Skipper soon followed.

Barbie stirred up a fair amount of controversy over the years. Many saw Barbie as a positive role model for girls as she had countless careers over the decades, which was a direct challenge to traditional 1950s gender stereotypes. On the other hand, she had a vast wardrobe of clothing, dream houses and fancy cars, which some felt encouraged young girls to be shallow and materialistic.

The issue that concerned most Barbie-bashers was the unrealistic body image her figure could inspire in young girls. If Barbie was the size of a living, breathing woman her measurements would be about 36-18-38 – outside of the likes of Marilyn Monroe, who rung in reasonably close at around 35-22-35 (see: The Truth About Marilyn Monroe’s Size), hardly attainable without a fair amount of cosmetic surgery.

But love her or hate her, people are still buying her. More than 800 million Barbies have been sold worldwide, and collectors have been known to sell their firstborns for a first edition Barbie in mint condition (I’m exaggerating, but only slightly – one sold at auction for $27,450.)