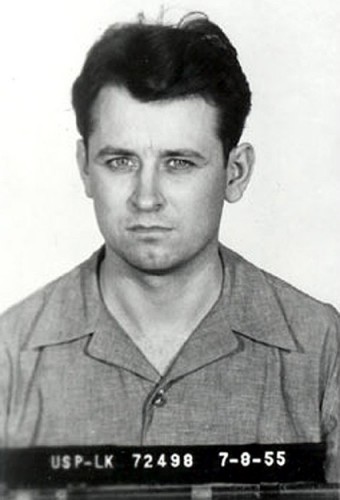 Escaped convict James Earl Ray pled guilty to the assassination of civil rights leader Martin Luther King Jr. on March 10, 1969. King was shot and killed while standing on the balcony outside his hotel room in Memphis, Tennessee on April 4, 1968. (This also lead to the death of a hotel worker. Lorraine Bailey, who was the wife of the motel owner and who it was named after, upon seeing King get shot had a heart attack and later died from this.  This was partially why there was such a delay in getting an ambulance as Lorraine was also the switchboard operator and so when Reverend Samuel Kyles attempted to call an ambulance using the phone in the motel room, nobody was at the switchboard to make that happen.)

Three days after pleading guilty, Ray claimed he was innocent and attempted to withdraw his previous plea, insisting he had been set up as a pawn in a larger conspiracy. His motion was denied.

The night Dr. King was shot, a rifle was discovered a block away from the Lorraine Motel, where the assassination took place. As the investigation continued over the next few weeks, all of the evidence – the rifle, fingerprints and eyewitness accounts – pointed to one suspect: petty criminal James Earl Ray.

Ray, who had escaped from a Missouri prison in 1967 while serving time for robbery, became the target of a massive manhunt in May of 1968. He had procured a Canadian passport under a false name and was apprehended at London airport on June 8, 1968. Ray admitted he was trying to make his way to Rhodesia (now Zimbabwe.)

On the advice of his attorney, the high-profile criminal defense lawyer Percy Foreman, James Earl Ray entered a guilty plea to the murder of Dr. Martin Luther King in order to avoid being sent to the electric chair. Mr. Foreman insisted that Ray sign each page of the letter in which he recommended his client plead guilty. Part of the letter stated: “in my opinion there is a little more than a 99 percent chance of your receiving a death penalty verdict if your case goes to trial.’’

A few days later, Ray purported he met a man named Raoul in 1967 who had drawn him into a gunrunning operation. When MLK was murdered, Ray stated he realized he was being set up to take the fall for the crime and high-tailed it to Canada. The judge wasn’t buying it, so his motion to change his plea was denied, as were his numerous requests for new trials throughout the years.

Coretta Scott King, MLK’s widow, and their children grew to believe there may have been something to his story, or at least that he may be innocent. Martin Luther King Jr. was continually harassed by unremitting wiretapping and intimidation by J. Edgar Hoover’s F.B.I. during the final years of his life. His outspoken anti-war stance and call for guaranteed incomes for all Americans hardly endeared King in the upper echelons of the U.S. government during the post-Kennedy era. For instance, this was a memo circulated throughout the FBI offices after the “Dream” speech:

(Many of the FBI’s surveillance records, written and audio records, concerning King are currently held in the National Archives, but are sealed from public access until 2027.)

Needless to say, many a conspiracy theorist believes it isn’t a stretch to think the F.B.I. had a hand in King’s murder.

That said, in the years since the assassination, the crime has been re-examined on numerous occasions by the U.S. Justice Department, the House Select Committee on Assassinations, and the Shelby County, Tennessee, District Attorney’s office. All came to the same conclusion: James Earl Ray shot and killed Martin Luther King Jr. on April 4, 1968.

The House Committee did concede that a conspiracy may have existed, including the participation of one or more accomplices in addition to Ray, although there was no hard evidence to prove this theory.

According to Ray’s family and friends, aside from the physical evidence such as the rifle and the fingerprints, he also had a compelling motive to commit the crime: overt racism. Those close to him also insisted that he often spoke of his plan to assassinate the renowned civil rights leader.

In the end, James Earl Ray was sentenced to 99 years in prison and died in 1998.