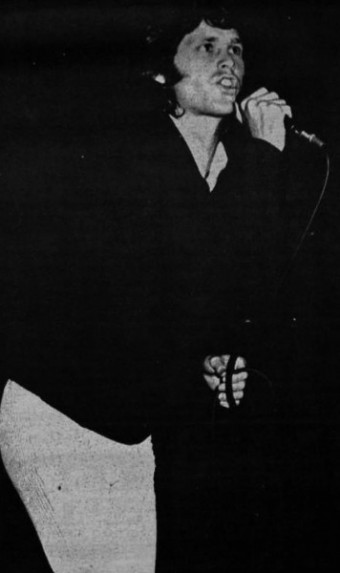 On March 5, 1969 an arrest warrant was issued for Jim Morrison for one felony count of lewd and lascivious behavior, along with three additional misdemeanor counts of indecent exposure, open profanity, and drunkenness. These charges stemmed from a Doors performance on March 1st at the Dinner Key Auditorium in Coconut Grove Miami, Florida.

The Miami concert had the potential to be a nightmare from the get-go. The Doors had agreed to play the gig for a flat fee, and since the venue owner did not have to pay a percentage of the door profits to the band, he figured he’d try to maximize his profits even further by taking out the seats. He then sold tickets to approximately twice as many people as the auditorium could normally hold. Despite the band manager Bill Siddon’s strenuous objections due to safety concerns, there was really nothing that could be done.

Another problem was that Jim Morrison was extremely drunk, even by Jim Morrison standards. You see, previous to the concert he missed his first flight to Miami, and then missed his flight once again during a stop-over in New Orleans. He passed the time getting fall-down drunk and by the time he finally made it to Miami, he was barely coherent.

The show was hardly Jim’s finest hour. He’d start a song, slur a few lines just to stop and hurl abuse at the audience, yelling, “You’re all *ucking idiots! You’re all *ucking slaves!” He’d sing a bit more, bum drinks from fans in the front rows, and encourage everyone to come to L.A. while slagging off Florida, his home state.

Then he waved his shirt in front of his pants and asked, “Want to see my *ock?” Whether anyone saw it or not would soon enough become the cause of heated debate. He continued on with his alcohol-fueled rambling and began singing “Light My Fire.” Some would say it was more or less a typical Doors show, just maybe a little more so.

The police seemingly didn’t find Jim’s antics lewd, lascivious or indecent enough during or directly after the show to take action. In fact, no-one publicly had any issues with the performance on March 1st until a review of the show accusing Jim of indecent behavior appeared in the Miami Herald on March 3rd. Suddenly everyone was outraged at Jim’s antics and some even organized decency rallies. Public pressure was intense, so a complaint was filed by a young employee of the state attorney’s office who had attended the concert.

On Wednesday, March 5, 1969 warrants were sworn out for the arrest of James Douglas Morrison by the Dade County State Attorney’s Office. Jim turned himself in on April 4, 1969 in Los Angeles. His trial, a farcical procession of contradictory witnesses, ended with Jim being found guilty of indecent exposure and profanity (both misdemeanors), but cleared on the felony charge and the misdemeanor drunkenness charge.

It also made Jim even more dissatisfied with his life as a rock star, and pushed him one step closer to leaving it all for Paris and life as a poet.