August 26, 2014 Sarah Stone
MK23 asks: How do they figure out the maximum occupancy for a building? 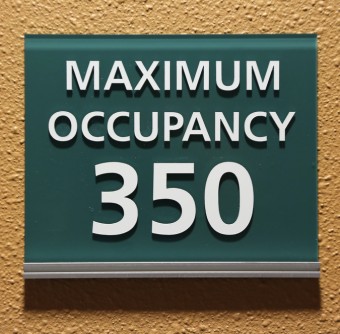 Generally speaking, the maximum occupancy of a room or building is primarily determined by the available exits, with each exit accommodating only a certain number of people before bottlenecking occurs. The other key component in determining the max occupancy of a building or room is the intended use of the space, whether it’s, for instance, a restaurant with tables and chairs or a more open event space.

In the United States, the National Fire Prevention Association (NFPA) also forbids an exit from leading occupants through a kitchen or storage room on their way out of the building.

As mentioned, another important consideration for determining the occupancy of a space is the intended use of the space. A restaurant with chairs and tables will have a smaller maximum occupancy than a bar with an open dance floor or layout. The IBC recommends for spaces with unconcentrated use of chairs and tables, such as a restaurant, that 15 square feet on that floor of the building be dedicated to each occupant. That means a 500 square foot restaurant might have a maximum occupancy of 33 people. However the IBC recommends areas with concentrated use of chairs, such as a bar with a dance floor, have 7 square feet of floor space on that floor of the building per person. The same 500 square foot space in a bar with a dance floor would have a tentative maximum occupancy of 71 people. That said, those numbers are all dependent on whether or not enough exits exist to allow all of those occupants to safely leave the building during an emergency.

The impetus for these regulations in the United States dates back to the worst hotel fire in the country’s history. The Winecoff Hotel Fire occurred in the early hours of the morning on December 7, 1946 in Atlanta, Georgia. The 15-story hotel considered “fireproof” due to its brick exterior had a single staircase that allowed guests to move from the upper floors to the first floor. That staircase had turned into a chimney for the smoke and fire by the time that the first of the fire fighters arrived at 3:45 AM. A number of trapped guests tried to escape through their windows, but only a small portion trapped managed to survive their escape while the rest either died inside or fell to their deaths. The fire resulted in 119 fatalities which amounted to 41 percent of the hotel’s guests that night.  Of the remaining, 65 were injured and the rest made it to safety whether because they were below the third floor fire level or were rescued by the 385 fire fighters who ultimately responded to the fire.  This fire occurred just six months after the La Salle Hotel fire which killed 61 people.  After these fires, President Truman ordered a national conference on fire prevention to revise fire codes for buildings.