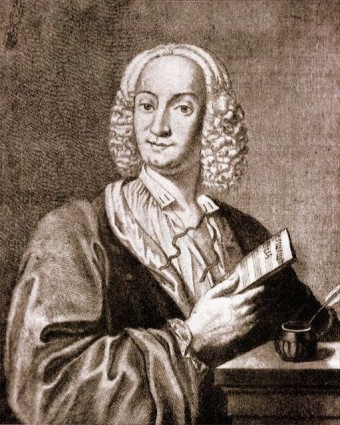 One of the most influential and renowned figures in European classical music, Antonio Vivaldi was born on March 4, 1678 in Venice, Italy. Music was in his blood – his father Giovanni was an accomplished violinist and Antonio’s first music teacher. Because of his father’s connections, the young boy was able to meet and play with some of the best musicians and composers in Italy.

However, despite his talent and musical connections, Vivaldi was groomed for a career as a priest, and he was ordained as such in 1703. A year later, he was pardoned from his priestly duties due to asthma, and was assigned instead to teach violin at an all-girls orphanage, the Ospedale della Pietà, in Venice. In fact, he composed many of his earliest works for the girls to perform with his first collection being published in 1705.

In 1716, he became the musical director at the orphanage and, under his tutelage, the institution achieved international acclaim.

Aside from his regular gig at the Ospedale della Pietà, Vivaldi also occasionally took jobs from wealthy patrons around Europe, such as his Bohemian patron Count Václav Morzin, whom he dedicated his great masterpiece The Four Seasons to.

Beside the Count, Vivaldi wrote a little ditty (Gloria e Imeneo) specifically for the nuptials of King Louis XV. Emperor Charles VI was also a fan, and even knighted Vivaldi.

Unfortunately, Vivaldi’s exceptional success early in his life did not hold him in good standing during his golden years. Overshadowed by younger musicians and changing tastes, Vivaldi headed for Vienna, hoping to land a spot as a court musician. As (bad) luck would have it, shortly after his arrival Charles VI died, leaving Vivaldi without patronage or an income.

Vivaldi himself died not long after, on July 26, 1741. He was buried in a pauper’s grave after a funeral with no musical accompaniment. His work fell into obscurity until 1939 when Alfredo Casella, a composer and pianist, arranged the Vivaldi Week revival. Since then, Vivaldi’s work has once again enjoyed great appreciation and success with the public.