This Day in History: March 3rd- Keller and Sullivan 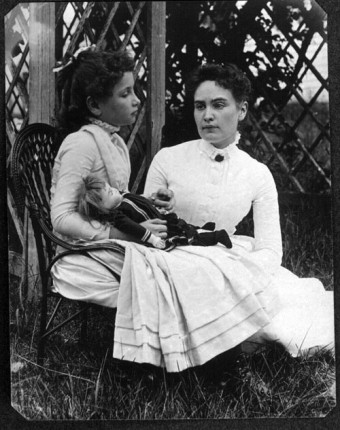 On March 3, 1887, the lives of two extraordinary women were changed forever when Anne Sullivan, an impoverished graduate of the Perkins Institute for the Blind, arrived at the home of the well-heeled Kellers to work with their daughter Helen. Obviously bright but over-indulged by her parents, Helen was unable to see, hear or speak due to an illness as a baby.

Anne Sullivan’s journey from Boston to rural Alabama was set in motion on the suggestion of Alexander Graham Bell, a leading authority on deafness. Helen’s parents, Arthur Keller, a newspaper publisher and former Confederate soldier, and his wife Kate had sought his advice on how to best assist their daughter. He recommended they contact the Perkins Institute, who in turn suggested the services of Anne Sullivan.

Uncomfortable from a recent eye operation and a long train ride, Anne was expecting to find her new pupil to be a quiet, fragile child, but Helen was nothing of the sort. As Anne stepped on the porch and shook hands with Mr. Keller, Helen nearly knocked her over in her hurry to feel Anne’s face, clothing and bag.

Helen was used to visitors bringing her candy as a gift, and motioned for Anne to unlock her suitcase and hand over the goods, which turned into a tussle between Helen and her new tutor. Anne managed to pacify Helen by allowing her to fiddle with her watch, and then coaxed the child to follow her upstairs to help her unpack. And so began one of the most remarkable and fruitful student-teacher relationships in history.

It’s important to remember that Anne Sullivan was only twenty years-old – a mere 14 years older than her six year-old charge when she began tutoring her. Not only did she face the daunting task of teaching Helen in the most academic sense – she was also tasked with disciplining this wild child without breaking her indomitable spirit.

Her well-meaning parents allowed Helen’s frequent and violent temper tantrums to rule the house-hold. Quickly realizing she’d never get anywhere in that environment, Anne Sullivan requested that she and Helen temporarily live in a cottage on the grounds away from the main house. The Kellers reluctantly agreed. Anne and Helen got to work in earnest.

As soon as Helen began learning, it became apparent she was an extremely gifted child (of course having an incredibly gifted teacher also helped.) She learned to both read and write, and by ten had also mastered speech. Mark Twain (Sam Clemens) was an admirer of Helen, and was quoted as saying, “The two most interesting characters of the 19th century are Napoleon and Helen Keller.”