A Woman Who Lost the Ability to Smell, Taste, See, and Hear as a Child was the First Deaf-Blind Person to Be Fully Educated 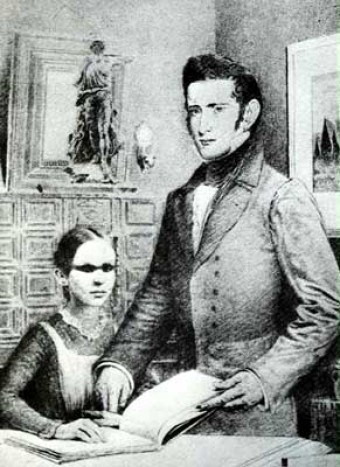 Today I found out about a woman who lost the ability to smell, taste, see, and hear as a child, but went on to become the first deaf-blind person to be fully educated.

The woman was Laura Bridgman.  Bridgman was born in 1829 and it is thought she had full use of all her senses at birth.  However, at the age of two years old, she became sick with scarlet fever, which lasted several weeks before she began to get better. Once she did heal, it became apparent that she had lost her sight and hearing in the process.  It was later discovered, after she was educated, that she had lost or never had a sense of smell and she also had nearly no sense of taste.

The one sense she did have was touch.  Amazingly, even with only this one sense and no real language, she was still pretty handy around the house as a child.  She enjoyed mimicking actions demonstrated to her through touch, so her mother used this to teach her how to do certain household chores.  She even learned to sew and knit.

Beyond that, her only real methods of communication were a very simple form of tactile sign language.  For instance, she knew if someone pushed her, that she was to go away.  If they pulled her, she was to follow along with the pull.  When she did an action correctly or what her family wanted, they would pat her on the head.  When she did something incorrectly, they would pat her on the back. Eventually, though, Bridgman became too much of a handful for her family as she frequently threw violent temper tantrums and would only obey her father who had to physically overpower her to get that obedience.

At this point, it was generally thought that at deaf-blind person would be unable to be taught even the most rudimentary things, beyond mimicking tasks, let alone be able to be taught to comprehend language. (Although, there are records of a few deaf-blind people learning basic tactile sign language and one French deaf-blind woman who was able to learn French, shortly before Bridgman. However, in these instances, these individuals were not able to become fully educated for a variety of reasons, for more on this, see the Bonus Factoids below).

Luckily for Bridgman, though, there was a school for the blind which had been founded the same year as her birth, in 1829, and which opened in 1832 (Perkins School for the Blind).  By 1837, many blind people had been successfully educated and one of the instructors there, Dr. Samuel Gridley Howe, learned of Laura Bridgman’s condition through an account written by the head of the medical department at Dartmouth College, Dr. Mussey.  Once Howe learned of Bridgman, he wanted to try and see if he could find a way to teach a deaf-blind person language, which would hopefully be the vehicle to educating her.

Laura, now 8 years old, was then sent to Perkins and began her education.  Howe and his assistant, Lydia Hall Drew, first started by devising a way to teach her names of objects in English by giving her objects with their names attached to them in the form of labels with raised letters.  Eventually, Laura was able to match labels to objects when the labels were detached.  However, at this point, she still had no concept of what she was doing and was only imitating based on memorization, rather than really understanding what the labels meant.  Now that she at least associated certain words with objects, even if she didn’t understand the significance, Howe took the exercise further by cutting up the labels and teaching her to rearrange them into the words that she associated with objects.

It was during these exercises that Bridgman finally grasped that objects have names and the labels were indicating the names.  This was first indicated by the fact that she suddenly independently wanted to know what the names of objects around her were.  Shortly thereafter, she began to fully grasp the concept of an alphabet and, from there, they were able to begin to teach her to use the alphabet and words in communicating.

Once that was accomplished, the rest of her education was relatively straightforward.  Her brain now had an engine to drive conscious thought, including essential abstract thought.  She proceeded to attend classes like any other student at Perkins, though with various teachers with her at all times finger-spelling everything to her.  During her education, she learned mathematics, astronomy, writing, geometry, philosophy, history, biology, etc.

Thanks to Howe being able to successfully reach Bridgman and the fact that he’d been able to do it while she was still fairly young, which allowed her to be able to think abstractly once she had a language for her brain to use, there now was an established method for “reaching” deaf-blind people.  Further, it was now proven that deaf-blind people are capable of learning just as well as anyone, assuming they were reached at a young enough age, which was contrary to what most thought at the time.

Howe also published an account of Bridgman’s education which drew the interest of Charles Dickens who came to meet her when she was twelve, in 1842.  Dickens then wrote an account of Laura Bridgman in his work, American Notes. In 1886, three years before Bridgman’s death at the age of 59, this account in Dickens’ work resulted in Helen Keller’s parents learning that a deaf-blind person could be educated.  It was also through Howe’s methods for teaching Bridgman that Keller was taught.

(Note: If you liked this article, you might also like these: How Deaf People Think and Helen Keller was Not Born Blind or Deaf)

Holy home is from everlasting to everlasting.
Holy home is summerly.
I pass this dark home toward a light home.
Earthly home shall perish,
But holy home shall endure forever.
Earthly home is wintery.
Hard is it for us to appreciate the radiance of holy home because of the blindness of our minds.
How glorious holy home is, and still more than a beam of sun!
By the finger of God my eyes and my ears shall be opened;
The string of my tongue shall be loosed.
With sweeter joys in heaven I shall hear and speak and see.
What glorious rapture in holy home for me to hear the angels sing and perform upon instruments!
Also that I can behold the beauty of heavenly home.
Jesus Christ has gone to prepare a place for those who love and believe Him.
My zealous hope is that sinners might turn themselves from the power of darkness unto light divine.
When I die, God will make me happy.
In heaven music is sweeter than honey, and finer than a diamond.
Expand for References