This Day in History: November 4- Lincoln and Todd 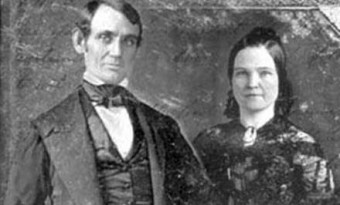 On November 4, 1842, a struggling lawyer named Abraham Lincoln married the well-to-do Mary Todd, a Kentucky native like her new husband. The small wedding took place at the home of Mary’s sister in Springfield, Illinois.

Mary Todd met Abraham Lincoln in late 1839, when she moved from her home in Lexington, Kentucky to her sister Mrs. Ninian Edwards’ home in Springfield, Illinois. At a cotillion held shortly after her arrival, the 30 year-old Lincoln approached the new girl in town and reportedly said, “Miss Todd, I want to dance with you the worst way.”

Mary, who was ten years his junior, was immediately taken by the gangly, yet sweet, lawyer from her home state. Her family, who had hoped to see her marry better, tried to discourage the match, but to no avail. When Abraham proposed, Mary quickly accepted.

But it was a rocky road to the altar. Lincoln ended their relationship and the engagement in 1841, but the couple abruptly reunited in the fall of 1842 and almost immediately got married. Their wedding was a last minute decision, and many of their friends and family didn’t know about it until it was a done deal. Even today many people question – why so sudden after breaking off the relationship?

It’s a well-known fact that Lincoln didn’t consider himself prime marriage material. A lady he was very taken with had died, and he’d had one broken engagement in the past. The gun-shy Abe had wrote to a friend, “I have now come to the conclusion never again to think of marrying, and for this reason; I can never be satisfied with anyone who would be blockhead enough to have me.”

Nevertheless, Abe began courting Mary Todd, but all evidence suggests he had a change of heart as he was really in love with Matilda Edwards, who was also living at Ninian Edwards’ home. To make things even more awkward, Lincoln’s best friend Joshua Speed was also interested in Matilda (in the end she rejected both of them).

When Abe tried to break up with Mary, she did not take it well, and Lincoln was taken aback by her reaction. He kissed her, and she construed this as a reconciliation. She released him from this obligation, but the thought that he caused Mary humiliation and heartbreak ate away at him so badly that he eventually returned to her in late 1842 (after receiving assurances from his newly-wed friend Speed that marriage really wasn’t all that bad).

There are those that suggest the Lincolns married in haste because the bride was already pregnant, and the wedding was thrown together so rapidly for that reason. Some theorize that Todd “seduced” poor Abe and forced him into a loveless marriage that he wanted no part of. As for their son, Robert, he was born nine months to the day after their wedding, not “prematurely,” so if Marry Todd really did use a pregnancy to get him to marry her as some claim, Robert would have had to come very late for her to have known, or she’d have had to simply lie to Abe and hope she got pregnant right away. Given they were separated until almost literally the day of the wedding, it seems unlikely that Abe would have believed such an obvious lie; no woman could know she was pregnant so quickly.

As for the idea that simply sleeping with Todd would have compelled Lincoln to marry her, this also seems implausible, though not as much as the pregnancy notion. Lincoln is known to have visited at least one prostitute before as many a young man in his era did, so simply sleeping with a woman (apparently) for him wasn’t a guarantee that he’d have to marry her.  Of course, Marry Todd was from a well-to-do family, and certainly not a prostitute, so perhaps this would have made a difference to Abe if he did sleep with her before they got married.

Whatever the case, his best man on his wedding day claimed he “looked like a man going to the slaughter” and he supposedly referred to Todd as “the devil” on the way to the wedding. In another account many years later, after a man sought retribution with Lincoln over his wife’s behavior (including beating the man with a broom), Lincoln said to him “Taggart, I’ve been putting up with her for the past 15 years, can you not put up with her for just 5 minutes for our friendship’s sake?”

Of course, much has been written about what a shrew Mary Todd was, but living with a perpetually depressed (and occasionally suicidal) Honest Abe couldn’t have been a barrel of laughs either. Lincoln biographer William E. Barton pointed out:

It is possible to prove on the testimony of unimpeached witnesses that Lincoln loved his wife passionately, and that he did not love her at all; that he married Mary Todd because he loved her and had already answered in his own heart all his previous questions and misgivings, and that he married her because she and her relatives practically compelled him to do so, and that he went to the marriage altar muttering that he was going to hell; that Mary Todd not only admired Abraham Lincoln, but loved him with a beautiful and wifely devotion, and that she hated him and never ceased to wreak revenge upon him for having once deserted her upon the eve of their announced marriage.

Like any other marriage, the only people who know for sure are the spouses themselves, who, until someone invents a time machine, can’t be asked.