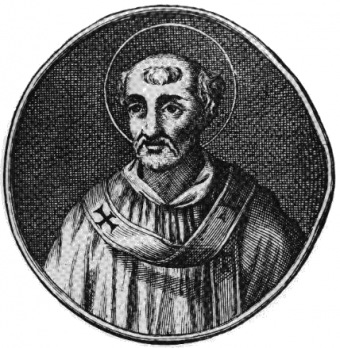 In the 1st century AD, while his flock was suffering from the sadistic persecutions of the Roman Emperor Nero, the second pope, Linus, put as his top priority, at least as far as we have records of, ladies’ hair.

Little is known of Linus, and in fact some accounts dispute that he was even the second pope. Tertullian claimed in his De praescriptione that St. Clement succeeded Peter as the second pope.

However, most scholars accept the account provided by St. Irenaeus in his Adversus haereses, where he wrote in the 2nd century AD: “After the Holy Apostles (Peter and Paul) had founded and set the Church in order . . . they gave over the exercise of the episcopal office to Linus.”

According to most sources, this was a dangerous time to be a Christian in Rome. On July 19, 64 AD, fire broke out and raged for the next six days. Although the extent of the damage has been disputed (see Did Nero Really Fiddle While Rome Burned?), when it was finally contained, several districts of Rome were destroyed, along with the hearth of the Vestal Virgins, the Temple of Jupiter Stator and the Atrium Vestae. Needless to say, the Roman people were not happy and were looking for someone to blame.

Some at the time blamed Nero. Tacitus wrote that “appearances suggested that Nero was seeking the glory of founding a new capital,” and that he leveled most of the city to make room for new construction. This conspiracy theory doesn’t really line up with what we know of the situation (again see: Did Nero Fiddle When Rome Burned?), but it is known that after the fire, Nero built a a mansion on some of the cleared land, as well as a beautiful landscaped park with a man-made lake, and populated the area with majestic villas and pavilions.  It should come as no surprise that this gave the rumor that he’d set the fire even more legs.

To deflect the charge that he started the fire, Nero publicly claimed that a newly-formed religious sect, the Christians, set the fire. To punish these terrible arsonists, Nero fed them to the lions, crucified them, clothed them in animal hides to be hunted and attacked by vicious dogs, and used them as human torches to light his garden parties… Charming.

At about this time, Linus took the papal throne. The Liberian Catalogue states that his reign was from 56 to 67 AD, while the Catholic Encyclopedia puts the period from 67-76 AD. Whatever the case, he was in charge while terrible things were being done to his people.

Given that, you might expect that Linus would have offered guidance to his followers on how to avoid persecution, or at least issued letters of instruction and encouragement in the style of St. Paul’s epistles. Yet there is only one instruction given by Linus that we have today; recorded in the Liber Pontificalis- it limits its directive to ensuring that women keep their heads covered “in conformity with the ordinance of St. Peter.”

Linus’ original decree has not survived, which has led some to claim that Linus was not the first pope to issue the proscription against bareheaded women participating in religious activities. Others believe that Linus was the originator of this important policy, which today is found in St. Paul’s first letter to the Corinthians:

“I want you to know that Christ is the head of every man, and a husband the head of his wife, and God the head of Christ. Any man who prays or prophesies with his head covered brings shame upon his head. But any woman who prays or prophesies with her head unveiled brings shame upon her head, for it is one and the same thing as if she had had her head shaved. For if a woman does not have her head veiled, she may as well have her hair cut off. But if it is shameful for a woman to have her hair cut off or her head shaved, then she should wear a veil. A man, on the other hand, should not cover his head, because he is the image and glory of God, but woman is the glory of man. For man did not come from woman, but woman from man; nor was man created for woman, but woman for man; for this reason a woman should have a sign of authority on her head, because of the angels . . . .” –1 Corinthians 11:3-10

At least Linus had his priorities straight…

So what ever happened to St. Linus? Along with many other Christians of his era, it appears he was martyred on September 23, presumably in 76 AD; however, as with nearly everything concerning Christians of this time period, even Linus’ martyrdom is in dispute. While the Roman Canon places him as an early martyr of the primitive church, along with Pope St. Clement I and Pope St. Anacletus, other historians note there is no direct evidence of this.

Regardless, the test of time proved that Linus’ women’s heads decree was popular. In fact, as late as 1917 (while all of Europe was embroiled in The Great War), Catholic leaders issued an updated Code of Canon Law that instructed men to remain bareheaded but women to cover their heads when they assisted at mass.