This Day in History: October 9th- The Banishing of Roger Williams 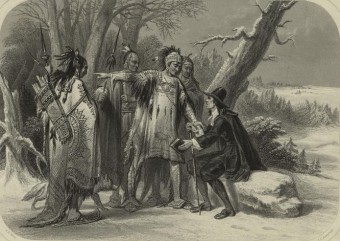 On October 9, 1635, a Puritan minister named Roger Williams, who had fled England in 1630 with the hope of escaping religious persecution, was banished from Massachusetts because of the same sort of intolerance he had faced back home. His crime? Advocating complete religious tolerance and speaking out against the confiscation of Native American Land.

Roger Williams was born in London in 1603, an era still reeling from the affects of England’s split from the Catholic Church. While he was growing up, he had seen those accused of heresy whipped, jailed and even burned at the stake. By the time Williams finished University, he had embraced the concept of Separatism and believed the Puritans should break away from the Church of England.

His belief in Separatism, along with his wild ideas about freedom of religion, got Roger into hot water with church authorities, so he decided to try his luck in Boston where he was welcomed as a “godly minister.” At first. Unfortunately, Boston was just as intolerant as London, so Williams moved a few miles south to Plymouth, hearing the colony was more welcoming to Separatists.

After a peaceful two years in Plymouth colony, Williams accepted a call to act as minister for a church in Salem, just north of Boston. Once he moved back into the Massachusetts Bay Colony, things started to go downhill for Roger Williams in a big way.

Williams had not only seen religious persecution in action – he’d also been a victim of it. He firmly believed that the root cause of most of the world’s wars was religious intolerance and that no civil authority had the right to punish any acts of religious dissension. He stated that: “all religious sects had the right to claim equal protection from the laws, and that the civil magistrates had no right to restrain the consciences of men or to interfere with their modes of worship or religious belief.”

And if that wasn’t enough to raise a zillion heresy red flags, Roger also held the crazy notion that Native Americans were actually the legitimate owners of their own lands, and if the colonists want to settle on it they should ask them respectfully if they would care to sell it for a fair price.

These insane ramblings ran counter to the entire system set up by the British King to grant land to British subjects, which was a no-no. So after Williams was found guilty of spreading “newe & dangerous opinions” by the General Court of Massachusetts, he was banished from the colony.

The Narragansett Indians helped Williams relocate, and provided land for him and his followers to settle on Narragansett Bay. The settlement was open to anyone seeking religious tolerance. Williams named his new settlement Providence, and it became a haven for the New World’s Baptists, Quakers, and Jews.