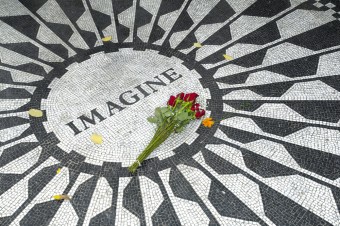 John Lennon’s second solo album Imagine, the follow-up to John Lennon/Plastic Ono Band, was released on October 8, 1971 in the U.K. (It had been released the previous month in the U.S.) Imagine was an artistic and commercial triumph, and proved to be the high water mark of Lennon’s career until his final album, Double Fantasy, was released immediately before his death in December 1980.

The basic tracks for Imagine were done during the summer of 1971 at John’s home, Tittenhurst Park, in Berkshire, England. Most of the proceedings were documented by a film crew. The finishing touches were done in a week at New York City’s Record Plant.

Though Imagine is best known for its legendary title track of the same name, the album was chock-full of Lennon at his best. “Oh, My Love,” in all its beautiful simplicity, is one of the most believable and relatable love songs ever written. “Jealous Guy” conveys an honest vulnerability very rarely seen in the macho world of rock music. Say what you will about Yoko Ono, but she inspired some of the best music of the past 50 years.

George Harrison played on five of the tracks from the album, including the not-so-subtle dig at fellow ex-Beatle Paul McCartney “How Do You Sleep?”

The only thing you done was
Yesterday
and since you’ve gone it’s just
Another day
How do you sleep?
ah how do you sleep at night?

Not a lot of gray area there.

Maybe John saw this as pay-back for Paul featuring a photo of two beetles fornicating on the back cover of his latest album, Ram? Petty one-upmanship was par for the course between those two in the first years post break-up, so it must have steamed Paul a bit when “Billboard” had this to say about Lennon and Imagine:

Lennon has emerged as the real British Dylan, chronicling his own personal search for self-expression with that of the times which threaten to divide the self into oblivion. Down-to-earth honest introspection is steeped in insight, while magnificent string arrangements complement Lennon’s latest concept of rock on “Imagine,” “Give Me Some Truth,” “How Do You Sleep?,” “Oh Yoko” and “Crippled Inside.” Move over Sgt. Pepper.

But it’s the song “Imagine,” which became one of the most covered songs of all time, that the album, and John Lennon himself, is remembered for. Although credited to Lennon alone, he later said that it “should be credited as a Lennon/Ono song. A lot of it—the lyric and the concept—came from Yoko, but in those days I was a bit more selfish, a bit more macho, and I sort of omitted her contribution, but it was right out of Grapefruit (Yoko’s 1964 book).”

Though Lennon agreed the song was pretty much the Communist manifesto, he insisted he himself didn’t belong to any movement, Communist or otherwise. He told the New Musical Express:

There is no real Communist state in the world; you must realize that. The Socialism I speak about … is not the way some daft Russian might do it, or the Chinese might do it. That might suit them. Us, we should have a nice … British Socialism.

Years later, Yoko Ono described the lyrical meaning of the song Imagine as: “Just what John believed: that we are all one country, one world, one people.”