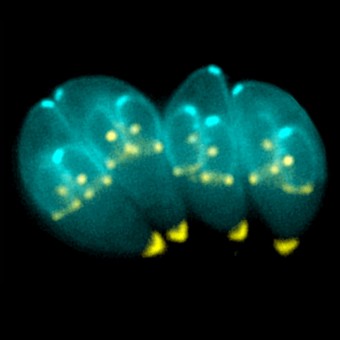 If we were to tell you that there is a parasite out there that can infect virtually any warm-blooded creature on Earth; is found just about everywhere; approximately 33% of humans are infected; and is also mysteriously linked to people committing suicide and brain cancer, then we told you that it was most commonly found in cats, you’d say we had to be lying because cats would be extinct if we all knew that. (Well, if they weren’t so adorable.) It turns out, we’re not lying and the truth gets even more interesting.

Known as Toxoplasma gondii, the parasite can cause a disease aptly called toxoplasmosis in virtually any warm-blooded creature it infects. Luckily for us, toxoplasmosis is rarely, if ever, fatal in any species.

That said, it is still a very major concern to the scientific and medical community. As noted in a work sheet released by Stanford University, toxoplasmosis has a very high mortality rate when people with a weaker immune system, such as patients suffering from HIV/AIDS, are infected with it. The disease is also noted as being very dangerous to infants and other, otherwise immunocompromised patients.

So how do you catch it? Well, there are several well documented and universally agreed upon ways in which an ordinary person can come into contact with the parasite, and hence the disease.

As a fun bit of trivia, the link between eating uncooked meat and the parasite was conclusively proven when scientists in Paris fed orphans nearly raw beef, horse and lamb meat to test the hypothesis that the parasite could be transmitted in this way. If you’re hoping that this happened hundreds of years ago, it took place in 1965. Oh and the orphans were housed in a sanatorium (building for treating people with long term illnesses) at the time.

If you’re now disgusted at the French for allowing such experiments on orphans, it should be noted that to test penicillin’s effectiveness in treating syphilis and other STDs, researchers led by Dr. John Charles Cutler from the United States (funded by the Public Health Services, the Pan American Health Sanitary Bureau, and the National Institutes of Health) headed to Guatemala in 1946 and found prostitutes who had syphilis, getting them to then give it to unsuspecting Guatemalan soldiers, mental health patients, and prisoners.  They also directly infected certain individuals by “…direct inoculations made from syphilis bacteria poured into the men’s penises and on forearms and faces that were slightly abraded … or in a few cases through spinal punctures.”

It isn’t known how many people died as a result of this as the results from the study were never published.  If you think that is bad, check out the infamous Tuskegee syphilis experiment where about 600 American citizens were told they were getting free health care when in fact the physicians were just studying how untreated syphilis progressed (many to death, as well as spreading it to others as they were not told they had it). Dr. John Cutler was involved in that one too.  He faced no consequences for the numerous people that died in his experiments, and he even lead an illustrious and celebrated career including at one point becoming an assistant to the U.S. Surgeon General.  So needless to say, there are bad eggs in every country.

But we digress, in regards to cats, they are noted as being the “definitive host” of the Toxoplasma gondii parasite. In fact, it can only sexually reproduce when it is inside of a cat. However, it can asexually reproduce and live “indefinitely” inside the body of virtually any warm-blooded host, like a human. Since Toxoplasma gondii parasites can’t complete their life-cycle inside of us though, we are defined as being “intermediate hosts”.

Before you go out murdering adorable kittens, we need to stress that the chances of catching the parasite from cats, if you’re doing anything other than handling cat feces directly and not washing your hands after, is infinitesimally small. So much so in fact that owning a cat is not considered a risk at all in terms of acquiring Toxoplasma gondii, unless you’re pregnant. This is due to the fact that Toxoplasma gondii parasites can be passed from a mother to her child while she’s pregnant. And, as noted, a severely weak immune system, such as the baby has, is a recipe for death when acquiring this parasite.  However, even this generally isn’t much of a risk unless the woman in question first acquires the parasite while pregnant. But given the consequences include potential death to the child, it’s recommended to be ultra careful concerning this parasite when pregnant. Otherwise, you’re probably going to be fine.

We say probably because although the vast majority of people are perfectly safe from harm from the parasite, up to a third of people worldwide, are infected with it. (Yes, 1 in 3.) Further, about 40% of people in the U.S. have been exposed to the parasite at some point (often in unwashed vegetables or undercooked meat) and about 15% of people in the U.S. have the telltale cysts in their heart, nervous system tissues, and skeletal muscle, with each cyst containing many thousands of the parasite. However, it’s likely that the vast majority of these people will never realise they’re infected and never suffer any ill effects as a result of the infection. As noted by the official Public Health England website, the symptoms of toxoplasmosis in ordinary, healthy people are usually nondescript and mild.  If any symptoms do show up, it generally only happens when you first acquire the parasite, and these are simply mild flu-like symptoms that last a couple weeks.

So, in the end, despite the fact that a third of the world is infected with this parasite, unless you have a crippling disease that’s ravaging your immune system, are getting an organ transplant, or are a tiny baby, it will probably never bother or affect you in anyway.

Again, we say “probably” because there is a growing, but as yet unproven concern that the parasite can cause a number of mental health problems. For example, research conducted by the Maryland School of Medicine found that women infected with the parasite were “1.5 times more likely to attempt suicide”.  Other studies have linked the parasite to even more alarming health issues such as schizophrenia and even brain cancer.

By far the most fascinating thing about the parasite, however, is its apparent ability to control the mind, or at least the behaviour of certain of its hosts. Specifically, rats infected with the parasite will become unusually attracted to the scent of cat urine, a scent they’d usually avoid like the plague. Terrifyingly, the parasite seems to accomplishes this by completely and permanently overriding the rat’s natural fear of cats and their distinctive odour.  Instead, the rat becomes intensely sexually attracted to it instead. Needless to say, this makes it much more likely that the rat will be eaten by a cat, which allows the Toxoplasma gondii to get inside its preferred host. As of yet, (thankfully) no such mental change has been noted in human beings.

In the end, our own immune system keeps the majority of symptoms, and by extension the parasite, at bay. When it doesn’t, for example in immune deficient people, the subsequent disease often results in death, with initial complications including encephalitis (inflammation of the brain) and pneumonia.