The Parasite that Becomes a Tongue 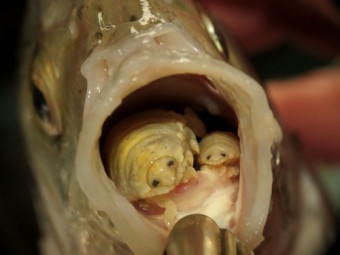 In warm Pacific waters from the Gulf of California to the Gulf of Guayaquil thrives a parasite that has a very twisted relationship with its host.

A member of the family Cymothoidae, the tiny Cymothoa exigua, or tongue eating louse, enters its victim through the gills. Once inside, the female latches onto the base of the fish’s tongue, while the male attaches behind her or on the gills. Through her front claws, she sucks the fish’s blood, which causes the tongue to die and drop off. She will then re-attach, this time to the tongue stub, effectively becoming its replacement. With an eww factor of 10, the fish can and will use the parasite as if it were its natural tongue.

Each infested fish almost always has more than one mating pair in its mouth. In fact, because these lice are such loving couples (called isopods, where the male is attached to the female’s back), it is more rare to see three lice in one fish mouth than four or six.

Amazingly, other than losing a tongue, infected fish seem to suffer little from the louse infestation. As one researcher noted, although “C. exigua appears to be a benign parasite whose influence could modify the behavior of heavily parasitized fishes . . . the effect can be considered insignificant at the present time.”

Most louse females found attached to a fish tongue are seriously in the family way. It is estimated that each female can have between 480 and 720 eggs, of which an average of over 200 typically reach maturity.

If there are two males in a fish without females to mate with, one of the C. exigua will change sexes from male to female, not unlike happens with clownfish if the female of a group dies.  Of course, in clownfish it gets a little more interesting, as clownfish are all born male.

One bit of good news for the species of fish that will have their tongues eaten off: research indicates that each female is only capable of producing a single brood.

The Tongue-Eating Louse Grosses Out, But Otherwise is Harmless to, Humans

If there is one bright spot in this story, it is that C. exigua does not eat human tongues, is not poisonous, and can only hurt you a little bit – and then only if you pick one up (like you would), and it bites you.

Despite this fact, a person in Puerto Rico who allegedly accidentally ate a bit of C. exigua filed a lawsuit against the supermarket chain where she purchased its host fish. It appears as if the suit was dropped when testimony was presented that “isopods are routinely consumed as food.” Yuck!

Tongue-Eating Louse on the Move

Until recently, it was believed that C. exigua had a range limited to the Eastern Pacific from California to Peru and preyed on only eight species of fish including three types of snapper, three of drum, 1 grunion and 1 grunt. However recent reports have led some to ask if it has expanded its range.

In 2005, some poor Brit found one in the mouth of a red snapper purchased from a fishmonger in London. When asked at the time, an expert who was consulted opined: “I suspect the tongue louse was either imported here in the mouth of the red snapper or perhaps it has started to breed in European seas.”

More recent developments are making the latter seem more likely. In 2009, in the waters off the Channel Islands near the coast of Normandy, France, fishermen discovered a tongue-eating louse in the mouth of a Weaver fish, and in April 2013, a Belfast man found one in his sea bass. Neither species was previously known to be susceptible to the parasite.

To date, C. exigua is the only known parasite that is capable of replacing an organ or other structure that it has removed from its host.

Unlike C. exiguI, a wide variety of horrific parasites love to prey on humans: