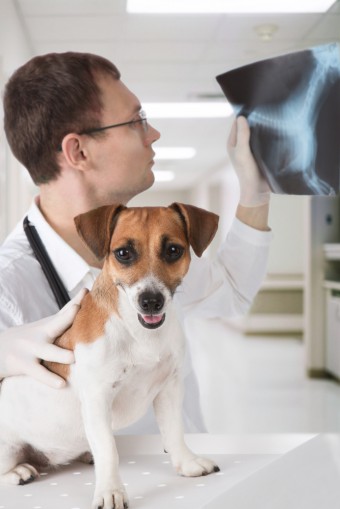 Eleven thousand years ago, one saucy canine got busy and, as can happen with unprotected sex, gave its partner a venereal disease, although uniquely, this VD was cancerous. Over the course of the intervening millennia, that second dog, its partners, and its partners’ partners, all did what dogs eventually do, each spreading the disease, which has continued to retain some DNA from its progenitor.

First described in 1810, Canine Transmissible Venereal Tumor (CTVT), was first thought to simply be a form of canine cancer of the:

Vagina or rather the womb of bitches [where it] takes on an ulcerous state, accompanied with a fungous excrescence, which is brought on oftentimes from the horrible brutality of boys who force dogs from bitches in the act of copulation. . . . In the penis of dogs also a similar fungous excrescence sometimes forms, but it does not appear to erode the neighboring parts much: it increases rather than diminishes in size, till its offensiveness obliges the animal to be made away with.[i]

As more attention was given to the condition, coitus interruptus as a cause was rejected, although veterinarians continued to observe the disease:

A tumor the shape of a cauliflower would appear around a dog’s genitals, growing quickly and becoming prone to bleeding. Some dogs died from the cancer, although many . . . experienced a remarkable cure: after a few months, the tumors spontaneously shrank and vanished . . . never to return.

By 1871, scientists realized the cancerous tumors were infections, spread by sexual contact. Today, CTVT is found across the globe, although, interestingly, recent research has demonstrated that the cancers have a remarkable relationship:

The DNA in one tumor is very similar to the DNA in other tumors – even tumors growing in dogs on the other side of the world.

Most cancers are not “catchy.” For example, when a cancerous cell comes into contact with a human body:

But this diversity-dependent mechanism did not work when the ancient dog infected his partner, and scientists believe this is due to in-breeding:

Murchinson and her colleagues suggest that . . . the dogs belonged to an early population that was very small. Small populations can also be very inbred, with little genetic diversity. That similarity may have made it hard for the immune system of the second dog to distinguish the cancer cells from itself. . . . . When the second dog mated with a third, the cancer spread further . . . [and] continued to evolve. As the cells divided, some picked up mutations [and] . . . . As it spread . . . it evolved new deceptions to escape the notice of other immune systems. . . .

Since it grows and feeds by stealing mitochondria (energy generators) for its hosts’ cells, it acts much like a parasite “that carries the original dog’s mutated genes with it, although small variations occur as it evolves with each new host.”

How CTVT Spread Across the Globe

Because each new host will add genetic variations, however small, researchers have been able to tell how quickly CTVT had spread across the globe:

To understand this evolutionary process, Murchison and her colleagues selected two tumors . . . one form an Aboriginal camp dog in Australia . . . the other from an American cocker spaniel in southern Brazil. . . . The two tumour genomes proved remarkably similar, and Murchison estimates that their most recent common ancestor occurred just 460 years ago. This suggests that CTVT remained in an isolated population of doges for most of its history, then something happened . . . .

The 16th century coincided with not only the development of most of our modern dog breeds, but also European colonial expansion. Many conclude that Europeans were to blame for the spread of CTVT, when they brought their “cancer-laden dogs with them” to these distant lands.

In addition to showing the relatively recent spread of the disease, the genome sequencing revealed that the tumors:

Share about two million mutations in common that are not found in ordinary dog cells. That staggeringly huge collection of mutations [demonstrates] . . . that the tumors descend from a common ancestor.

In fact, the researchers learned a lot about the original dog from their genetic analysis:

The founder animal was of medium to large size and had a mixture of dog and wolf alleles linked to domestication . . . The researchers estimated the total number of mutations to be around 500,000. From there, a “molecular clock” was used to calculate the age . . . at around 11,368 years.

These genomes are “most similar to those of huskies and Alaskan malamutes . . . one of the oldest lineages of domesticated dogs.”

One thing the researchers were unable to discern was the founder’s gender because the “samples held only a single X chromosome,” and there is no evidence if the missing chromosome would have been another X (meaning a female founder) or a Y (meaning a male ancestor).

In only a few limited circumstances, cancers can be transmitted between humans:

A mother can pass cancer on to a fetus . . . . Also during organ transplantation, if the organ donor has cancer, it is possible to transmit cancer that way . . . [And] there was a case where a surgeon received a cut during surgery and developed cancer at the site of the cut. And so presumably the cancer cells found a way to implant in his skin and began to grow.

In recent years, a virulent contagious cancer has decimated the Tasmanian devil, a species known to have low genetic diversity:

Devil facial tumor disease emerged in 1996 and has slashed Tasmanian devil populations by 60%. If left unchecked, it could drive the species to extinction in 20-30 years.