Where Did the Word “Scumbag” Come From?

May 15, 2014 Matt Blitz
Mondagiriaksita asks: I was told a scumbag was originally a condom. Is this really where the word came from? 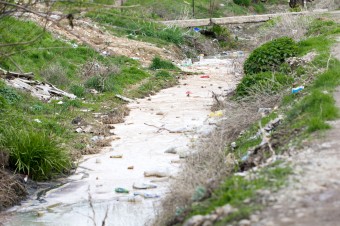 “Scum” originated in the early 14th century from the Middle Dutch word “schume” meaning foam or froth. There was also a similar word in old French – escume. For about two hundreds years, the word evolved to mean a “thin layer atop of liquid,” then it became “a layer of dirt,” and then, just simply, dirt.

In 1586, the phrase “scum of Africa” showed up in the Christopher Marlowe play Tamburlaine, this marked the first known time scum was used as an insult, though that trend would be frequently repeated elsewhere after this: “These are the cruell pirates of Argeire, That damned traine, the scum of Affrica.”

In 1604 it had evolved to include worthless bits that rise to the surface during the process of purifying metal: “There was a great store of these poore mettalls, whereof they made no great account, but were rejected…as the skumme of the good mettall.” (de Acosta’s Natural History of the Indies)

As for the first use of “scumbag,” this was not, as is popular stated, a condom.  Rather, in 1812, Abraham Rees compiled 45 volumes of an encyclopedia entitled, simply, Rees’s Encyclopedia. In the 34th volume, dedicated to the arts, sciences, and literature, Rees referred to a scumbag in relation to a straining bag when refining sugar:

Having kept it simmering for several hours, and having provided a cooler or receiver, over which is placed a strong wooden frame, and upon this a basket, to which a coarse bag, called the scum-bag, is fitted, he pours the contents of his pan into this basket and bag… and a strong board, called a scum-board, is laid upon the bags, with several weights upon the board, to press down the scum.

This use of the word obviously relates back to the “foam or froth” definition of scum.

Over the next century to a century and a half, the word evolved into meaning something quite different. Scumbag, as referencing a condom, seems to have first appeared in volume nine of the American Journal of Orthopsychiatry in 1939. However, I was unable to get access to the source material on this one, though several otherwise normally reputable sources do cite it as the first instance and I have no particular reason to think they’re wrong, just normally I like to read it for myself before presenting something like that as a fact.

The Oxford English Dictionary disagrees with the 1939 reference, and puts the first reference much later. However, although the OED is one of the best with this sort of thing, even they aren’t immune to occasional mistakes. This wouldn’t be the first time I’ve seen the OED wrong on the first documented instance of something, and you’re about to read another confirmed instance of this.  But considering the scope and depth of their work, I think we can all give them an occasional pass. 🙂

In any event, the Merriam-Webster Dictionary and Oxford English Dictionary date “scumbag,” in reference to a used condom, to 1967, with the first known use of “scum” meaning “semen,” according to the OED, being in that same year in Wentworth & Flexner’s Dictionary of American Slang.

Whether the 1939 American Journal of Orthopsychiatry instance is valid or not, the 1967 reference is definitely not. In a book entitled Sex Histories of American College Men published in 1960, college-aged males were calling condoms this by this time: “According to him and the rest of the boys, the name of the thing was scum bag.”

The word popped up more and more from there, and in June 1971, Frank Zappa, John Lennon, and Yoko Ono recorded a live track at Filmore East in New York City that they called “Scumbag.” By 1972, the word was also being used to describe a “despicable person,” which has been the more common definition ever since.