What is Non Dairy Creamer Made Of?

May 1, 2014 Melissa
Craig asks: What is non-dairy creamer made from? 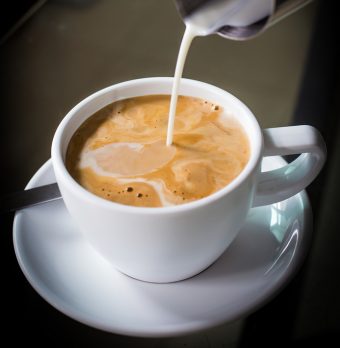 Yucky stuff. But you have alternatives…. The chemicals, oils, sugars and milk products (yes, milk, in a “non dairy” product) vary depending on your brand.

Carrageenan: Extracted from the red seaweed more commonly known as Irish moss (Chondrus crispus), carrageenan is used as a thickening agent and emulsifier to make foods creamier. It has no nutritional value.

Corn Syrup: Corn starch is comprised of a “chain of glucose,” a simple sugar. When the starch is broken down into its “individual glucose molecules, the end product is corn syrup.” If the corn syrup in your creamer is “high fructose,” that means that enzymes were added which converted some of the glucose to fructose, the kind of sugar found in fruit. High fructose corn syrup has 15% more calories and 20% more carbohydrates than plain white sugar.

Dipotassium Phosphate: As a food additive, dipotassium phosphate acts as a stabilizer to prevent coagulation in products like non-dairy creamer. It’s also added to fertilizers and cosmetics, although it can irritate the skin and eyes. If “consumed directly in quantities,” it can cause “vomiting and diarrhea.”

Mono- and Diglycerides: These additives have either one (mono) or two (di) fatty acids attached to a glycerol (sugar alcohol) molecule. Typically, they are used in food to “blend together certain ingredients, such as oil and water, which would otherwise not blend well.”

Castoreum is all natural, and adds an appealing, vanilla-like flavor to sweets; however, it is extracted from “the dried glands and secretions from a beaver’s rear end.”

By comparison, MSG’s origins aren’t nearly so revolting. It is typically either produced by: (1) hydrolyzing a protein:

With a strong mineral acid . . . [which causes] the glutamic acid [to be] separated . . . and converted to its monosodium salt . . . [or by (2)] bacterial fermentation [where] strains of Micrococcus glutamicus are grown aerobically in a liquid . . . [where] the bacteria . . .excrete glutamic acid [which] . . . is separated from the [liquid].

Palm Oil: A highly saturated fat, palm oil stays solid at room temperature, which makes it a popular ingredient in processed foods. Unlike some natural sources of fats, according to the World Health Organization, consuming palm oil is approximately as bad for you as consuming trans fats. It is also terrible for Mother Earth.

Strong demand has encouraged massive deforestation in Indonesia, the world’s largest producer of palm oil, where ancient forests are burned to the ground to make room for palm plantations. This burning, which includes the carbon-rich peat on the ground, contributes:

Two billion tons of carbon pollution per year – almost 20% of the total emissions problem . . . and creates more carbon pollution than all of the cars, trains and planes in the world combined.

Thereby doubling your risk of heart disease [as well as] increasing blood clotting and inflammation, which can increase your risk of having a heart attack or stroke.

Sodium Caseinate: The chemical name for a protein found in milk, sodium caseinate is often added to “non-dairy” creamers to whiten them, and is also used in paints and plastics.

Sodium Stearoyl Lactylate : Also called SSL, this popular food additive acts as an emulsifier and is also commonly used to “strengthen dough” and increases products’ shelf lives. Its unique qualities allow it to “reduce the amount of oil needed to achieve the same flavor and consistency,” so it is often used to make “healthier” products.

If you’d rather skip the chemicals, fats and beaver booty, but still crave a little creaminess in your java, you might want to consider one of these (relatively) healthier options.

A good choice for the lactose intolerant, almond milk comes in a variety of flavors. Typically supplemented, it is a good source of vitamins A, B-12 and D as well as potassium, phosphorus and zinc.

More than half of the fats from coconuts are known as medium-chain triglycerides (MCTs) – a type of fat that is more likely to be burned off as fuel, rather than stored on the body.

For those not afflicted with lactose intolerance, smaller amounts of these high-fat foods can produce health benefits:

In addition, whole milk has lots of protein and calcium, as well as vitamin D and potassium.  Further, recent studies are showing that, contrary to what was once thought, “consumption of whole-fat dairy is linked to reduced body fat.”

Imparting no additional buzz to your morning cup of Joe, hemp milk is also a viable alternative for the lactose intolerant. A cup of Hemp Bliss original flavor provides 20% of the RDA of iron and 5 grams of protein, with only 7 grams of fat.

Although recent research has raised some concern about ingesting too much soy, it remains a good source of vitamin A and calcium, and one cup provides six grams of protein and only 4 grams of fat.