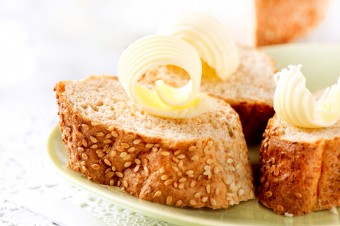 Odds are you probably have a stick or a tub of it sitting in your fridge right now, but do you have any idea how margarine became a staple in most kitchens? It turns out, margarine has a long and controversial international history, and can even boast the involvement of Emperor Napoleon III in its invention.

Margarine derives its name from a discovery in a chemist’s lab in France in 1813. Scientist Michel Eugène Chevreul uncovered a new fatty acid that he decided to call “acide margarique.” His discovery consisted of shiny, pearl-like deposits, so margarites seemed an apt name, as it is the Greek word for “pearly.”

Several decades later, Napoleon III was pondering the fact that not only the poor people in his empire, but also his armed forces, could certainly use an affordable substitute for butter; so he offered a reward to anyone clever enough to come up with a suitable, cheap replacement.

A chemist named Hippolyte Mège-Mouriès rose to the occasion, inventing a substance he dubbed “oleomargarine,” which was later shortened to “margarine.” By 1869, Mège-Mouriès had patented the process for creating margarine that had won him Napoleon’s prize.  His oleomargarine was comprised primarily of beef tallow, salt, sulfate of soda, gastric juices of a pig, and a little cream, all heated and mixed into a butter-like substance, though in truth at this stage it was more of a jelly than what we think of as margarine today… but it kind of tasted like butter at least!

Despite winning the prize, the product never really took off. Mège-Mouriès sold the patent to a Dutch outfit called Jurgens in 1871, which spawned Unilever, still the leading manufacturer of margarine to this day. This company improved upon Mège-Mouriès’ techniques and  created an international market for margarine, building factories in Germany, Norway, Austria, Sweden, Denmark, Norway and England. The Dutch businessmen also realized that if they were hoping to sell their product as a butter substitute, it would be helpful for margarine to look as much like butter as possible. Besides improvements in texture, they also had to fix the color. You see, margarine is naturally white; thus, they began dyeing it slightly yellow to match the faint yellowish tinge butter naturally has. (Of course, today many butter makers also dye their butter to make it a much deeper yellow than is natural, as this is what people have come to expect.)

The war between butter and margarine had begun.  As Mark Twain recorded overhearing from a businessman around the turn of the century on a riverboat trip in Cincinnati:

Why, we are turning out oleomargarine now, by the thousands of tons. And we can sell it so dirt-cheap that the whole country has got to take it-can’t get around it, you see. Butter don’t stand any show-there ain’t any chance for competition.

This particular businessman didn’t take into account dirty politics. After buttering up various politicians, the dairy industry convinced them to pass The Margarine Act of 1886, which put a two cent tax (about 50 cents today) on every pound of margarine sold. Within two decades, that was raised to ten cents per pound (about $2.61 today). (In Canada, the situation was much more serious for margarine fans – margarine was made illegal from 1886 to 1948.)

Around this same time, particularly in U.S. states where the dairy industry held great sway, dying margarine yellow became illegal to further discourage sales and keep people hooked on butter. In a few states, it even became law that margarine sold in those states had to be dyed pink.

Nefarious advertisements were also run, such as one in a 1911 edition of the Chicago Tribune where it showed arsenic, tin cans, and cats being thrown into a vat with a few other ingredients where it was all mixed together to form margarine.  Various rumors were spread about as to what went into making margarine, even though essentially margarine and butter weren’t all that different at this point, with both containing about 80% animal fat and 20% water. The fats involved here were even predominately from the same dairy animal.

However, the popular main type of fat used in margarine was about to change. The lack of available beef fat, coupled with new techniques in the hydrogenation of plant materials, made the use of vegetable oils in the formulation of margarine not only possible for the first time, but much more economically viable. Between 1900 and 1920, oleomargarine was made with a mixture of animal fats and vegetable oils.

The Great Depression, followed by rationing during World War II, led to a further reduction in the supply of animal fat, and by the mid-40s, the original margarine had almost disappeared from grocer’s shelves in favor of the vegetable oil version. These events, particularly WWII, also helped spur the popularity of margarine as butter shortages abounded.  By 1950, this surge in popularity resulted in the old extreme tax on margarine predominately going away, for the first time since the beginning putting margarine on a level playing field with butter.

There still was the coloring issue for a few years longer.  From the beginning, the margarine manufacturers retaliated by packaging their product complete with a packet of yellow dye included. The intent was for the margarine to be placed in a bowl and mixed with a spoon by the consumer. The down-side to this was that the final results were often uneven, and could end up as light or dark yellow, or even yellow and white striped.

Another method of dyeing the family margarine entailed placing a capsule inside a plastic package of margarine. The package was then kneaded to distribute the dye, a job usually given to one of the lucky children of the household. In the mid-1950s, like the heavy taxation that was removed a few years before, the artificial coloring laws were done away with and margarine could be sold in pretty butter-like hues once again.

Since then, many efforts have been made to progressively make margarine more healthy, such as introducing healthier fats and nixing the trans-fats that used to be prevalent in the substance.  There have also been improvements in flavor to get things even more butter-like.  So, while the modern versions bear little resemblance to the original oleomargarine, other than usually containing approximately the same amount of fats and water, we still call it margarine.

Oh, and if you’re wondering what became of Hippolyte Mège-Mouriès… Aside from the prize he won from Emperor Napoleon III, he didn’t really profit from his invention; the poor guy died, well, poor in 1880. Easy come, easy go.