This Day in History: May 20th 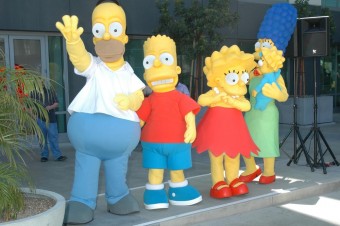 On May 20, 2005, The Simpsons aired its 400th episode, earning the distinction of being the longest running series in television history. Not bad for a show that started as a cartoon used between sketches for a comedy series.

Simpson’s creator Matt Groening got the gig on “The Tracey Ullman Show” in 1987 after producer James L. Brooks came across his twisted comic strip “Life in Hell.” Brooks convinced the executives at Fox that The Simpsons would be a hit as a half-hour animated sitcom (something that hadn’t been done since The Flintstones) and the series made its debut in December of 1989 with a special Christmas episode called “Simpsons Roasting on an Open Fire.”

When the Simpsons joined the prime-time line-up, all the other sitcoms such as the The Cosby Show, Growing Pains, and Full House featured perfect families living perfect lives. Not the Simpson clan. They were headed by an oafish, self-centered, beer-swilling dad and an enabling, co-dependent mom, a sociopathic, manipulative son, a gifted yet whiny daughter, and a baby that would probably run away if able. The Huxtables they weren’t.

It’s hard to imagine now, but at the time the Simpsons were considered questionable, controversial, and even vulgar. Schools were banning kids from wearing Simpsons T-shirts to school, and even President Bush got in on the act when he was running for re-election in 1992. He told prospective voters he wanted American families to be “a lot more like the Waltons and a lot less like the Simpsons.” Showrunner Al Jean’s response was, “To say Americans should be like the Waltons … well, they were a very sad family with no money.”

Clearly, this was years before Eric Cartman killed his enemy’s parents, cut them up, and fed then to his nemesis in a bowl of chili. Ah, how innocent we all were in the early ‘90s.

Speaking of the early ‘90s, by then The Simpsons were beating the The Cosby Show, NBC’s hugely popular sitcom, in the ratings. This marked a significant turning point for the show, and signaled to Al Jean and the rest of the Simpsons staffers that, “Gee, we aren’t going anywhere. We’re staying.”

Over the years, The Simpsons went from a tacky, lowbrow cartoon to a critically acclaimed must-see mainstream pop-culture phenomenon. The show has earn at least 27 Emmys, Time magazine has dubbed it the 20th century’s best TV series, and it has spawned many millions of dollars in merchandizing. Homer’s catchphrase, the always useful “D’oh!” is now included in the Oxford English Dictionary. No, really.

After 25 years, there are critics who moan that the show has lost its luster and lacks the spark, wit and focus of the earlier seasons. The Guardian’s Ian Jones wrote in 2007 that “The Simpsons of today revels in big, stupid antics, one-note gags and obvious plot twists,” but to be fair, there were fans complaining that the series was going downhill as early as season two.

The Simpsons paved the way for all the other adult-oriented animated series that followed such as South Park, Beavis and Butthead, Family Guy, King of the Hill, and countless others. Bart may seem pretty tame when compared to a Stewie or especially a character like Cartman, but there are legions of fans that insist even after all these years, The Simpsons is the Best. Show. Ever. And, as General Disarray lamented to Professor Chaos (a.k.a. Butters) in South Park, no doubt reflecting the creators’ own frustrations with coming up with plots for the show, regardless of what plan Professor Chaos came up with, “Simpsons did it!”  In fact, when South Park produced their 200th episode, the crew over at The Simpsons sent them a congratulatory note with the message “Congratulations on 200 Episodes. (We Already Did It.) (Twice.)”