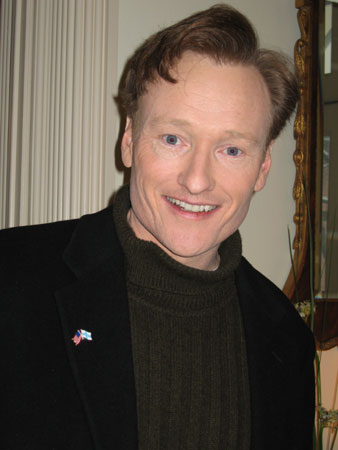 Today I found out that Conan O’Brien spent two years as a writer and producer of The Simpsons before replacing Letterman as the host of Late Night.

After becoming burnt out working at Saturday Night Live, Conan quit and decided to do something else, though he had no idea what.  When Mike Reiss and Al Jean from The Simpsons heard about it, they called him up and offered him a job, even though he didn’t really have any experience writing sitcom scripts.

On his first day of work, he showed up and they showed him into this office and left him to jot down some episode ideas.  When he left for a coffee break a few minutes later, he heard a crash and walked back into the office and there was a hole in the window and a dead bird on the floor.  This happened within 10 minutes of him arriving at his new place of work.  Nice omen!

After two years of working on The Simpsons, he got the job as the new host of Late Night on NBC.  Fox tried to force him to stay as he still had a year on his contract with them, but he ended up being able to get out of it when NBC paid Fox half the value of Conan’s salary that year and Conan paid the other half.  Seems like NBC is often paying to end Conan’s contracts prematurely.