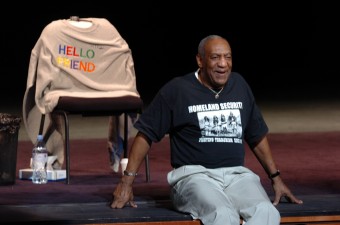 Like so many later-comedians, Bill Cosby described himself in school as “the class clown”.  Born in 1937, William Henry Cosby worked at several different jobs growing up, including selling produce, stocking shelves in a supermarket, and apprenticing in a shoe repair store.  He served four years in the U.S. Navy and later entered Temple University on a track and field scholarship. (He also played fullback on the Temple football team.)

While at Temple, Cosby started working as a bartender to supplement his income. Realizing he had a knack for making the customers laugh while serving them drinks, Cosby decided to pursue a career as a stand-up comedian. In 1963, he received his first national exposure with an appearance on “The Tonight Show”.  In 1964, he recorded the first of his now-classic comedy albums “Bill Cosby is a Very Funny Fellow….right!”

By 1965, Cosby was one of the hottest nightclub comics in America. Enter writer/actor Robert Culp, who had written a script where he was to star as a James bond-style secret agent.  Culp brought the script to producer Carl Reiner, who told him to show it to producer Sheldon Leonard, who was developing a new series called “I Spy“.  Leonard soon signed Culp to star in his new “spy series” as spy and “tennis bum”, Kelly Robinson, and now set about to find Culp a co-star.

The co-starring character in “I Spy” was named Alexander Scott and was originally intended to be an older, mentor-type character- oh yes, he was also supposed to be Caucasian.  But one night, after catching the stand-up comedy act of Cosby, Leonard’s fertile mind started percolating.  He felt Bill Cosby would be perfect in the role of Alexander Scott.  Of course, nowadays, the solution would be simple: just hire Cosby.  But this was 1965 and the times were a bit different. If Cosby was hired, this would be the first time in the history of television that a black American would co-star in a dramatic series.

Showing courage and foresight, as well as a keen sense of talent, Leonard threw caution to the wind and hired the popular stand-up comic, who had, at this time, never acted professionally in his life. Premiering on September 15, 1965, “I Spy” was an immediate hit, and the 28-year-old Cosby took to acting like the proverbial fish to water.

In an early episode, “Danny was a Million Laughs”, guest actor Martin Landau made a racial joke at Cosby’s expense.  Both Culp and Cosby bristled at the crude “humor” and insisted no racial references would ever be made again on the show; for the rest of the show’s run, that’s exactly what happened. Both agreed that “our statement is a non-statement”, Culp later recalled.

For its debut 1965-66 season, “I Spy” was a hit and rated in the “top twenty” most popular shows in the coveted Nielsen ratings.  All was not smooth sailing though, as you might expect. Some southern affiliates refused to air the series due to an “African”-American actor being shown on the same level as a white actor.  Cosby also received, for the era, the seemingly obligatory mounds of hate mail and death threats.

Aside from these cruel caveats, “I Spy” became established as a highly creative, as well as popular show, beloved by its millions of loyal fans. For those who haven’t seen the show, working as two undercover agents, Kelly Robinson’s cover was as a tennis player, while Alexander Scott’s was that of his manager/trainer.  Not only was Cosby’s character never subservient to Culp’s, Cosby’s “Scotty” was portrayed as the smarter of the two, being a Rhodes Scholar who was fluent in several languages. Culp’s “Kelly” was a “tennis bum”, a drinker and womanizer, with less discipline than the more level-headed “Scotty”. Beyond that, the two were shown as equals.

Mirroring real life, Cosby’s character never smoked or drank. Cosby also added other autobiographical touches to “Scotty”- like Cosby, the character was born and grew up in Philadelphia and went to Temple University (Cosby is seen wearing a Temple sweatshirt in several episodes.)

For his role in “I Spy”, Cosby won three consecutive Emmy awards for “Outstanding Lead Actor in a Drama Series”, in each season of “I Spy’s” brief three-year run (beating out his co-star each year!) “I Spy” also won a Golden Globe award for “Best Dramatic Series” in 1967.

Finally, in 1968, after three seasons (82 episodes), “I Spy” was canceled, but not before Bill Cosby did something no black American had ever done before, co-starred in a dramatic TV series.