Hero of Alexandria and His Amazing Machines 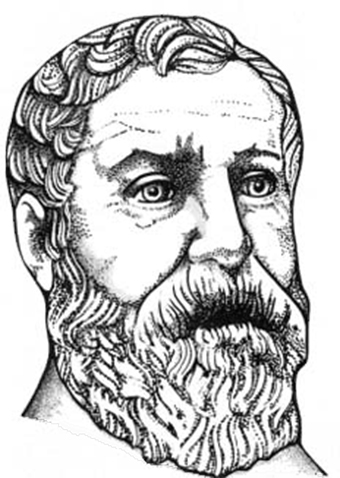 Two thousand ago, the Thomas Edison of the ancient world lived in Alexandria, Egypt where he tinkered, built and wrote about some of the most amazing and whimsical machines the pre-industrial world had ever seen.

Also called Heron, the Greek engineer and mathematician Hero is believed to have lived in the 1st century and was active in Alexandria between 60 and 70 AD. A prolific writer as well as inventor, Hero is credited with authorship of several manuscripts including Automata, the Pneumatica, the Dioptra, the Catoprica and the Mechanica.

Many of Hero’s writings sound more like lecture notes, and combined with the fact that he was an avowed pupil of Ctesibius (the man believed by many to be the first head of the Museum of Alexandria), most assume that Hero taught there as well.

The Museum has been characterized as an:

Unusual blend of pure science with engineering . . . [and] applied technology . . . [where] much can be discovered through experiment.

One of its most prolific experimenters, Hero’s creations included both “the practical and the fantastic,” in keeping with his intentions:

By the union of air, earth, fire, and water, and the concurrence of three or four elementary principles, various combinations are created, some of which supply the most pressing needs of human life, while others simply produce amazement and alarm.

Standing on the shoulders of giants, it is believed that Hero studied the works of Archimedes and Vitruvius, as well as Ctesibius, and most historians agree that some of the inventions included in Hero’s manuscripts were, in fact, first created by others. Nonetheless, for convenience’s sake, most of the machines are simply referred to as “Hero’s.”

Over the course of his life, the energetic Hero recorded dozens (if not hundreds) of descriptions and illustrations of his inventions. Here are just a few of my favorites:

A coin inserted in the slot strikes one end of a balance beam, lifting the other end temporarily and drawing a plug out of a pipe, allowing the water to flow. As the balance returns to equilibrium, the plug drops, seals the pipe, and the flow ceases.

Described by NASA as a “rocket-like device,” Hero’s steam engine (called an aeolipile) was essentially:

A hollow sphere that can rotate about an axis passing through antipodal points, because of steam flowing out through two bend pipes placed at its equator.

Hero gave detailed instructions on how to build one:

Place a cauldron over a fire: a ball shall revolve on a pivot. A fire is lighted under a cauldron . . . containing water, and covered at the mouth by the lid . . . with this the bent tube . . . communicates, the extremity of the tube being fitted into the hollow ball. . . . Opposite to the extremity . . . place a pivot . . . resting on the lid . .. and let the ball contain two bent pipes, communicating with it at the opposite extremities of a diameter, and bent in opposite directions, the bends being at right angles . . . . As the cauldron gets hot it will be found that the steam, entering the ball . . . passes out through the bent tubes towards the lid, and causes the ball to revolve.

An upper bin is filled with grain or sand, which gradually filters through a small hole into the lower chamber, causing the weight resting above it to descend with it, drawing up the cord that is wrapped around the wheel’s axle, which then rotates.

Also incorporating “wheels, pulleys, and levers,” the theater displayed a variety of automation:

Animated figures acted out a series of dramatic events, including the repair of Ajax’s ship by nymphs wielding hammers, the Greek fleet sailing the seas accompanied by leaping dolphins, and the final destruction of Ajax by a lightning bolt hurled at him by the goddess Athena.

Ctesibius is credited with developing one of the first force pumps (“Ctesibian machine“) which Hero incorporated into his fire engine that works by means of pistons, cylinders and valves, described by Hero as follows:

Take two vessels of bronze [made] to fit . . . pistons fitted to boxes. Let the cylinders [be connected] by means of the tube and be provided with valves . . . within the tube end opening outwards from the cylinders. In the bases of the cylinders pierce circular apertures . .. covered with polished hemispherical cups . . . through which insert spindles . . . connected with the bases of the cylinders. . . . The centre of the pistons fasten the vertical rods . . . and attach to [a] . . . beam . . . branching into two arms . . . and provided with small pipes through which to force up water . . . [and] producing a water-jet by means of the compressed air.

The Never-Ending Goblet of Wine

My personal favorite, Hero invented a wine cup that would automatically refill:

Since a liquid in a closed system will find a common level, as the wine is removed from the cup, it is replaced by wine from the central reservoir to which it is attached by a pipe. While the surface of the reservoir falls, a float falls with it, opening the faucet attached to a primary reservoir and allowing wine in, sufficient to seal the faucet again when the float rises.

Sadly, historian John Humphrey notes that “this is a good example of a mechanism that was probably never constructed [because] it is difficult to understand how the goblet . . . could actually be drunk from…”

Instructions for building a Hero’s engine are available online, including these, which rely on gravity rather than steam, and are safe and easy enough for children to follow.