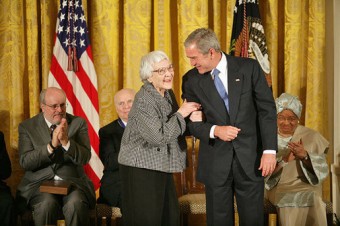 Today I found out about the year’s “free wages” that led to Harper Lee writing To Kill a Mockingbird.

The book, which was Lee’s first and only published novel until recently, was heralded as an “instant classic” when it was published in 1960, and it is a staple in high school classrooms today. But it might not exist at all if it hadn’t been for a kind benefactor who helped to support Harper Lee while she wrote the story.

Lee knew that she wanted to be a writer after developing an interest in English literature in high school. After graduation, she attended Huntingdon College in Montgomery, Alabama, where she focused on writing. However, a transfer to the University of Alabama saw a switch to a law degree—no doubt in an attempt to do something that was potentially more lucrative—before turning her sights back on writing again. She wrote for the school paper before she dropped out of college entirely, opting instead to move to New York to pursue a career in writing.

The problem is, you can’t produce a best-selling novel overnight, and you have to eat somehow. Lee ended up taking a job as an airline ticket agent, where she worked for several years. She was struggling with something all budding authors find difficult to balance: having the time and energy to write and the money to support herself while doing so. Luckily for Lee, she had befriended Michael and Joy Brown. Michael was a popular composer and lyricist who worked on Broadway, and was quite well off financially.

For Christmas in 1956, the couple gave Lee a generous present: a year’s worth of wages. With the money came a note saying, “You have one year off from your job to write whatever you please. Merry Christmas.”

Who could say no to that? Lee quit her day job with the airline shortly thereafter, and was free to write what she wanted, producing the story that would become To Kill a Mockingbird. But that wasn’t the end of the Browns’ generosity. They were also able to put her in touch with a literary agent, Maurice Crain, who would later help Lee get her bestselling novel published.

Reportedly, the first draft read like several short stories stitched together rather than a seamlessly written novel. Lee worked with editor Tay Hohoff to rework the initial manuscript, and two and a half years of rewrites followed. She was warned that the book probably wouldn’t sell more than few thousand copies.

However, Lee’s hard work had paid off more than anyone could have expected. Perhaps published at just the right time—dealing with racial issues just as the civil rights movement was kicking off in earnest—the book’s popularity skyrocketed shortly after publication in 1960. It was picked up by the Book-of-the-Month Club and the Literary Guild, featured in Reader’s Digest, and won a variety of literary awards, including the prestigious Pulitzer Prize. By 1962, it had been made into an award-winning movie. Needless to say, Lee was doing quite well.

Over 30 million copies of the book have now been sold, and it has been translated into 40 different languages. In 2009, it was reported that Lee was still earning $9,249 every day in royalties from To Kill a Mockingbird. At the moment, it’s estimated that Lee’s estate is worth over $45 million, and it’s estimated she’ll be earning $3-$4 million every year until she dies—and likely as long as the copyright lasts after her death, too.

No word on if she paid back the Browns who gave her the year’s wages that enabled her to see such success.

As to why she wasn’t interested in continuing to write and publish books after such a stunning debut, she had this to say,

Two reasons: one, I wouldn’t go through the pressure and publicity I went through with To Kill a Mockingbird for any amount of money. Second, I have said what I wanted to say and I will not say it again.