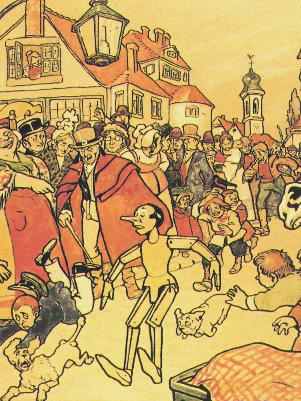 You probably already knew that Disney has a habit of taking dark, twisted children’s fairy tales and turning them into sickeningly sweet happily-ever-afters. Take Sleeping Beauty for example: it’s based on a story where a married king finds a girl asleep, and can’t wake her so rapes her instead.

The 1940 version of Pinocchio is no exception. The movie is based on a story that appeared as a serial in a newspaper called The Adventures of Pinocchio, written in 1881 and 1882 by Carlo Collodi. Jiminy Cricket appears as the Talking Cricket in the book, and does not play as prominent of a role.

He first appears in chapter 4 in which the truism that children do not like to have their behaviour corrected by people who know much more than they do is illustrated.  Apropos, when the Talking Cricket tells Pinocchio to go back home:

At these last words, Pinocchio jumped up in a fury, took a hammer from the bench, and threw it with all his strength at the Talking Cricket.

Perhaps he did not think he would strike it. But, sad to relate, my dear children, he did hit the Cricket, straight on its head.

With a last weak “cri-cri-cri” the poor Cricket fell from the wall, dead!

You might be happy to know that Pinocchio did learn his lesson quite soon after that—or seemed to. While he didn’t seem to feel bad about killing the cricket (in fact, he later tells Gepetto, “It was his own fault, for I didn’t want to kill him.”), he did seem to regret not taking the cricket’s advice as he runs into more and more trouble. At last, karma catches up to Pinocchio and he gets his feet burned off.

As he no longer had any strength left with which to stand, he sat down on a little stool and put his two feet on the stove to dry them. There he fell asleep, and while he slept, his wooden feet began to burn. Slowly, very slowly, they blackened and turned to ashes.

Don’t worry—Gepetto forgives him and builds him new feet, which is really more than Pinocchio deserves. You see, when Pinocchio first became “alive” and learned to walk, the first thing he did was run off. What’s worse is that Pinocchio leads people to believe that Gepetto has abused him, which lands Gepetto squarely in prison.

You would think by this time that Pinocchio would learn to be a good, obedient little boy, but that simply is not the case. The Talking Cricket returns as a ghost to tell Pinocchio not to get involved with some people who claim planting gold coins will result in a tree of gold. Rather than apologizing for throwing a hammer at the poor bug, Pinocchio scoffs at the advice once again.

Pinocchio’s decision to continue to ignore the Cricket resulted in him finding more grief in the way of being hanged by the very people who had told him about planting gold coins:

And they ran after me and I ran and ran, till at last they caught me and tied my neck with a rope and hanged me to a tree, saying, `Tomorrow we’ll come back for you and you’ll be dead and your mouth will be open, and then we’ll take the gold pieces that you have hidden under your tongue.’

The hanging scene was actually where the story was meant to end. Basically, Collodi wanted to convey the message that children could face grave consequences for being disobedient. However, the editor of the paper requested that Collodi continue writing—perhaps wishing for a bit more of a happily ever after himself—and that’s where the blue fairy came in to save the puppet.

In the additional chapters, Collodi made it so that Pinocchio learned his lesson and decided to take care of his father rather than spend his time playing and running amok.

In the end, Talking Cricket had a chance at revenge, but didn’t take it:

Father and son looked up to the ceiling, and there on a beam sat the Talking Cricket.

“Oh, now you call me your dear Cricket, but do you remember when you threw your hammer at me to kill me?”

“You are right, dear Cricket. Throw a hammer at me now. I deserve it! But spare my poor old father.”

“I am going to spare both the father and the son. I have only wanted to remind you of the trick you long ago played upon me, to teach you that in this world of ours we must be kind and courteous to others, if we want to find kindness and courtesy in our own days of trouble.”

“You are right, little Cricket, you are more than right, and I shall remember the lesson you have taught me…”