Where the Phrase Quitting “Cold Turkey” Comes From

March 24, 2014 Emily Upton
Mark asks: I don’t know if you’ve already covered this or not, but why do we call quitting something abruptly “cold turkey”? 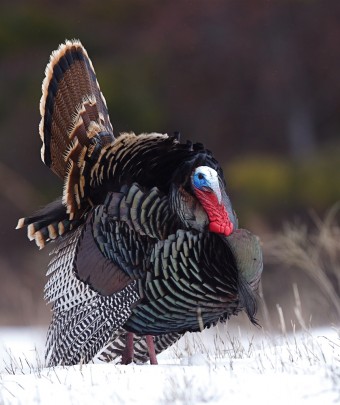 When you quit something “cold turkey” it means that you’re quitting smoking, drinking, a hard drug, or eating delicious chocolate cake right then and there without being slowly weaned off the addictive (possibly chocolatey) substance.

What with turkeys being a symbol of a famous American holiday, if you assumed that this phrase has its origins in the good old USA, you are correct.

It might surprise you, though, to learn that “cold turkey” actually started off meaning “plain speaking,” a meaning that is still around today, though much less prominently- with this definition usually in the form of “talking turkey” today.

The phrase “cold turkey” first appeared in print in 1914 in the Des Moines Daily News:

I’ve heard [Reverend Billy] Sunday give his ‘Booze’ sermon, and believe me that rascal can make tears flow out of a stone. And furthermore he talks “cold turkey”. You know what I mean – calls a spade a spade.

Exactly how turkeys are related to plain speaking is unknown, but there are a few theories. You might have heard that it dates all the way back to the Pilgrims and Native Americans chatting over a plate of turkey at “the first Thanksgiving,” but this theory is hardly credible, not the least of which because there is no record of Pilgrims actually eating turkey on the “first” Thanksgiving in America (which wasn’t actually the first, nor really at all as it is depicted popularly today).

More likely, “talking cold turkey” stems from the fact that a plate of cold turkey is a simple meal without many frills—that is, it was pretty plain. Therefore, “talking cold turkey” meant “talking plainly.” That said, there isn’t a lot of direct evidence to back this theory up either, but it’s seemingly the most likely of the various theories etymologists have come up with.

As for the “abruptly stopping a bad habit” definition, one of the earliest references of this can be found in 1921 in a Canadian newspaper, The Daily Colonist:

Perhaps the most pitiful figures who have appeared before Dr. Carleton Simon are those who voluntarily surrender themselves. When they go before him, they [drug addicts] are given what is called the ‘cold turkey’ treatment.

It’s likely that both meanings of the phrase were in use well before they appeared in print. The jump from plain talking to quitting drugs isn’t exactly clear, but once again the most popular and plausible theory is that, it’s believed that a plate of cold turkey has something to do with it. If talking cold turkey means talking plainly, then quitting cold turkey means quitting plainly without any frills or fancy methods used.

A second theory is that a person in extreme withdrawal looks and feels a bit like a cold turkey carcass. People going through withdrawal, particularly withdrawal from such things as a heroin addiction, are often cold to the touch, clammy, and covered in goosebumps. Heroin was a popular drug touted by its maker, Bayer (yes, the Aspirin people), as a non-addictive cure-all and widely marketed shortly before “cold turkey” first popped up in text meaning to abruptly quit something addicting, lending credence to this theory as comparisons could feasibly have been drawn between a cold turkey and the many rehabilitating heroin addicts of the age.  That said, like the previous theory, this is all simply a lot of educated speculation, rather than documented evidence backing the theories up.

Whatever the case, back in the 1920s, this phrase in this context was mostly only used to refer to people quitting some drug. However, over time it has evolved to mean quitting anything that might not be good for us in high doses.