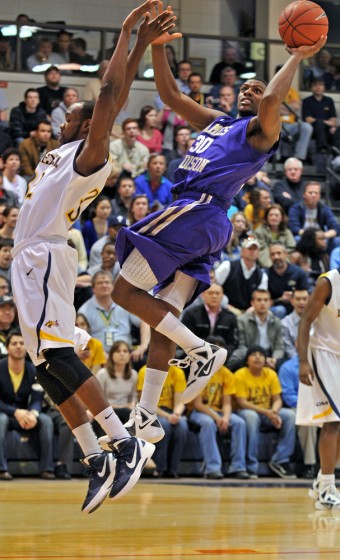 Every spring, a sort of illness strikes millions of Americans. Symptoms include screaming uncontrollably in celebration, panic sweating, obsessing over hastily filled-out brackets, sitting motionless in front of a television for hours, and wearing the bright colors of a college individuals attended many years ago. It’s called “March Madness” and it’s arguably the most popular sporting tournament in America. But what’s the history behind it? When did it start? And how did it get the nickname “March Madness?” As the case with most basketball-related questions, the answers lie in the great American midwest.

By 1920, there were sixteen teams playing in the tournament. It became a “statewide institution” in the late 1930s with over 900 schools in the state competing for the coveted sixteen slots. Tournament games were played in front of sold out crowds at the Huff Gymnasium at the University of Illinois, where it continued to be held until 1962.

There’s some discrepancies where the term “March Madness” originally came from. One of the first documented instances of it, though having nothing to do with basketball, appeared in a May of 1907 article about uselessness of animal experimentation. In this unbelievably odd and racially questionable sentence, the author makes his point:

If the rabbit could catch a Chinaman and fasten him in a devil-wagon, and fix the sparker, and pull the lever, and send him off whizzing, and then watch his actions, he would conclude, after the manner of your physiologists that men are governed by the peculiar form of reflex action known to you as hysteria, and to us as March madness.

It was soon also a term for the female European hares’ reproduction cycle, with the breeding peaking around March with most all of the mature females pregnant around this point;  this became known as “March Madness.”

So how did the term make its way into basketball? This is thanks to a 1939 article by the assistant executive secretary of the Illinois High School Association, Henry V. Porter. The article, entitled “March Madness,” appeared in the IHSA’s official magazine – Illinois Interscholastic. In it, Porter writes about the fans and their obsession with the “thud of the ball on the floor, the slap of hands on leather, the swish of the net are music in his ears.” This high school basketball tournament became so popular that three Marches later, in 1942, Mr. Porter wrote a poem called “Basketball Ides of March”:

A sharp-shooting mite is king tonight.
The Madness of March is running.
The winged feet fly, the ball sails high
And field goal hunters are gunning.

The first college basketball tournament, the National Association of Intercollegiate Athletics Men’s Basketball National Championship (which is still in existence today), was held in 1937. It was organized by basketball’s founding father James Naismith as a way to increase the popularity of the sport. The National Invitational Tournament (the NIT) followed the next year.

Ohio State coach Harold Olsen, who was the president of the National Association of Basketball Coaches at the time, knew his association, the National Collegiate Athletic Association (NCAA), had to devise a tournament to keep pace with their rivals. On March 17, 1939, the NCAA tournament was born with eight teams vying for the top spot. It ended with a championship game at Patten Gymnasium on Northwestern’s Evanston campus between the Oregon Webfoots and Olsen’s Ohio State Buckeyes. In front of an almost sold out crowd of 5,500, plus James Naismith himself, the Webfoots beat the Buckeyes, 46 to 33. The whole tournament actually left the NCAA in the hole financially about $2500 (or about $35,000 today), but no matter. They did it again the next year, 1940, and it turned a profit. The NCAA tournament has been turning March mad ever since.

So when did college basketball acquire the nickname of the aforementioned high school tournament? Not until the late 1950s, and then not popularly. Specifically, the first known reference was in a March 13, 1958 article in the Free Lance Star of Fredericksburg, Virginia, which had the headline, “March Cage Madness to Hit Peak as NIT Starts Tonights” and then went on to state:

Basketball’s March madness reaches its wackiest peak tonight with the NIT busting in on the NCAA big college, NCAA small college, and the NAIA in the alphabetical battle for national tournament honors…

There are other instances of this type of reference over the next 25 years, with the reference usually being something to the effect of “NCAA’s version of basketball March Madness” in a knowing admittance that it stemmed from high school hoops, but at this point the moniker wasn’t very popularly known outside of Illinois.

In 1982, that began to change. Brent Musburger was CBS’s main sports announcer then. He was well-known for his coverage of the NBA, The Masters, college basketball, and as a studio host for CBS’s football show The NFL Today. Prior to that, he had begun his career as a sportswriter and broadcaster in the Chicago area (as well as attended school at Northwestern University). He was pretty familiar with the “March Madness” high school basketball tournament going on in his state. So, he tried to interject a little Chicago into the 1982 broadcast by referencing the madness. This led to the more widespread popularization of the “March Madness” term in conjunction with the NCAA tournament. Said Brent Musburger in 2011 to Yahoo Sports,

I worked locally in Chicago, first as a writer for the Chicago Daily News and then as a broadcaster. First time I saw the term ‘March Madness,’ it was print, in an ad for a car dealer. It was referring to the Illinois high school basketball tournament. When we got the rights to the NCAA tournament in 1982, it was something that seemed appropriate to say.

That said, despite the above being well documented, the NCAA actually has officially credited Bob Walsh and the City of Seattle for the popular association of “March Madness” and the NCAA tournament. In 1984, Seattle played host to the tournament and was trying to find a fun way to market it. Walsh, in an interview with the Seattle Times in 2012, freely admits that they didn’t invent, but rather “reinvent the name and reinvent it as a celebration.” In 1988, the NCAA officially licensed “March Madness” as one of it’s trademarks in relation to the NCAA tournament.

But reinvention is not invention. In the early 1990s, both the IHSA and the NCAA were both claiming that they held the exclusive rights to all commercial uses of “March Madness.” Finally, in 1996, the IHSA sued GTE Vantage, a company that had licensed the term “March Madness” from the NCAA in order to name their video game as such.  In December of that year, the Seventh Circuit Court of Illinois rejected the IHSA’s claim to the rights to March Madness with regards to the NCAA Tournament.

After this loss, the IHSA and NCAA decided to cut a deal with one another. In early 2000 (after years of negotiation), they both agreed to transfer all rights to March Madness to a separate company called “MMAA.” In turn, each association received a license to use the “March Madness” term in relation to the their basketball tournament. Additionally, they would split the profits of licensing the term to other companies or products.