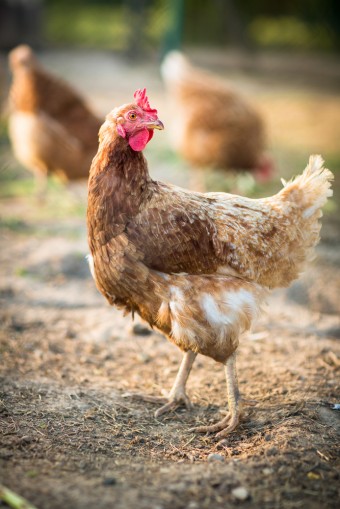 Despite what you learned in grammar school, there are way more than four states of matter. One possible new one, disordered hyperuniformity, was recently found in the weirdest place – the eyes of chickens.

To better understand an exotic state of matter like disordered hyperuniformity, it may be helpful to review the characteristics of the classical states of matter: solids, liquids, gases and plasmas.

Typically, each is defined according to the density and structure of its component particles:

Matter in this state will retain its shape regardless of its container, and its component particles are packed tightly together. There two main types of solids:

Amorphous solids have disordered structures like liquids, but are firm and hold their shapes like other solids. Amorphous solids have only a “limited, localized order proximate to their structural units,” but no long-range order. Examples include glass, plastic, mayonnaise and mud.

Crystalline solids have well-ordered, rigid structures, hold their shapes “over long atomic distances,” and, therefore, are said to have long-range order. Examples include ice, salt and carbon.

Having particles packed closely together but with no ordered structure, unlike amorphous solids, liquids will flow freely and not hold a shape (on their own). This state of matter has a constant volume and will conform to the shape of its containers. Examples include water, milk and juice.

One interesting variant that exists in “an intermediate state . . . between the crystalline solid state and the liquid state” are liquid crystals. This type of matter has a long-range order, but also flows like a liquid. Examples include some soap solutions, surfactants and cholesterol ester.

Matter in this state has no structured arrangement and like a liquid, will take the shape of its container, but unlike a liquid, will also expand to fill it. The particles in a gas are loosely packed, and thus a gas can be compressed. Examples of gases include air and oxygen.

Like gas, plasma has neither a set structure nor a definite volume; however, unlike gas, plasma molecules are electrically charged. Therefore, plasmas can produce magnetic electrical currents and magnetic fields, as well as conduct electricity. Examples of plasmas include lightning and the Earth’s ionosphere.

Matter that exists in these states is not observable under normal conditions. Examples of exotic states include Bose-Einstein condensates, degenerate matter, superfluids and, some claim, disordered hyperuniformity.

This state is characterized by its “hidden order” that:

Behaves like crystal and liquid states of matter, exhibiting order over large distances and disorder over small distances. Like crystals, these states greatly suppress variations in the density of particles . . . across large spatial distances so that the arrangement is highly uniform. At the same time . . . [these] systems are similar to liquids in that they have the same physical properties in all directions.

Examples of this condition have been found in “liquid helium, simple plasmas and densely packed granules” as well as the retinas of chickens.

In order to optimize sight, the cells that perceive light should be arranged in an array that allows the different cells to “evenly sample incoming light to produce an accurate representation of the visual scene.” The best arrangement found in the animal kingdom is the hexagonal array of the compound eyes of insects. Chickens’ eyes, however, cannot accommodate such an ordered system.

Remarkably complex, unlike human eyes that have only three types of cones in the retina, diurnal birds have five:

Four single cones, which support tetrachromatic color vision [seeing more wavelengths and maybe even colors than humans] and a double cone, which is thought to mediate achromatic [no color] motion perception.

Because of their different sizes and composition, the five cones in chickens’ eyes (one each for green, blue, red and violet, as well as the cone that detects “luminance”) cannot exist in an optimum orderly arrangement or array. Rather, their distribution appears irregular, although not random:

The individual cone patterns in the bird’s retina are arranged such that cones of one type almost never occur in the near vicinity of other cones of the same type. In this way, the bird achieves a much more uniform arrangement of each of the cone types than would exist in a random (Poisson) pattern of points.

Finding this condition puzzling, scientists recently attacked the problem using “a variety of sensitive microstructural descriptors that arise in statistical mechanics and particle-packing theory,” (or as I call it – math and science) and they discovered:

A remarkable type of correlated disorder at large length scales known as hyperuniformity . . . [where] the photoreceptor [cones] patterns of both the total population [all cone types] and the individual cell types [violet, red, blue, green and luminance] are simultaneously hyperuniform, which we term multihyperuniformity . . . .

This means that all five cones types, taken together, have a hyperuniform arrangement, and the arrangement of each cone type, when considered separately, is also hyperuniform. The researchers surmised, therefore, that the individual members of each cone type must be “subtly linked by exclusion regions, which they use to self-organize into patterns.”

The study’s authors concluded that, given the variation in the cones, this pattern makes the best of a bad situation:

Because the cones are of different sizes it is not easy for the system to go into a crystal or ordered state. The system is frustrated from finding what might be the optimal solution . . . the typical ordered arrangement. While the pattern must be disordered, it must be as uniform as possible. Thus disordered hyperuniformity is an excellent solution.