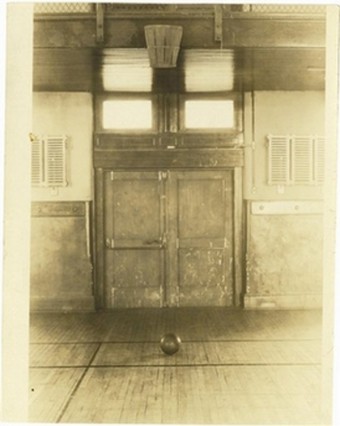 Today I found out the origin of the sport basketball.

Surprisingly, unlike most sports whose origins are somewhat obscure, often being the combination of other sports and developed gradually through time, basketball has a very precise and fully known origin (the inventor himself wrote an account of it, published after his death; see the “Sources and Further Reading” below).  Even the date of the very first game is known, December 21, 1891.

It was all started by Dr. James Naismith, the son of two Scottish immigrants to Canada.  By 1891, Dr. Naismith was teaching physical education in Springfield, MA at the YMCA International Training School (which today is Springfield College).  While there, he was asked by the director of physical education, Dr. Luther Gulick, to come up with a new game students could play indoors during the winter that would help keep track and field runners in shape and would be relatively safe to play (particularly that it would have a small amount of physical contact so that the players wouldn’t get injured in this game).

Dr. Naismith was given two weeks to come up with such a game.  What he came up with was inspired by a game he had played as a child, “Duck on a Rock”, which is a game that has been played since medieval times.  In “Duck on a Rock”, a large stone (“duck”) would be placed on top of an even larger rock or tree stump or the like.   One unlucky player was then given the job of guarding the rock.  All the other players would then have one rock to throw at the “duck” each, in order to knock it off the tree stump or rock it had been placed on.  If the “duck” was knocked off before the throwers had all thrown their rocks, the defender will cease defending and pick up the “duck” and go on the offensive.  Unfortunately, he does not get to chuck the duck back at the people who were just chucking rocks in his general direction.  Rather, after the duck is knocked off, all the players throwing stones must go and retrieve one of the thrown stones and then make it safely back to the throwing line.  After the defender picks up the fallen “duck” and places it back on the rock or tree stump, he/she is then allowed to run around and tag any of the players who have not yet made it back to the throwing line.  If a player is tagged, they become the new guard.

Rather than using a rock, Dr. Naismith’s decided his game would be played with an association football, also known as a soccer ball (click here to read about the origin of the name “soccer”, which, by the way this name preceded the first known instance of the sport first being called by the singular term “football”).  The goal of Dr. Naismith’s game would be to throw a soccer ball into a peach basket, which would be nailed up high on the wall.  He chose the soccer ball as he deemed it to be fairly safe to be thrown around and not likely to cause injury.  He decided to put the basket high on the wall because he observed most injuries seemed to happen in sports around the goal zone with both defenders and the offensive side becoming very aggressive in these regions. So he felt by putting it up high, it would prevent some of the potential for injury between offenses and defenses.

Interestingly, the original peach baskets did not have their bottoms knocked out, so whenever someone would get the soccer ball in the basket, the game would be temporarily paused while someone climbed a ladder to retrieve the ball.  This obviously soon became annoying, so a hole was put in the bottom of the basket.  Bizarrely, when they put this hole in the basket, they did not initially think to knock out the entire bottom and instead still had to use a long wooden dowel to poke the soccer ball out of the basket, which was at least less annoying than needing to climb a ladder.

Another major difference from modern day basketball is that there was no dribbling allowed, only passing and the person with the ball had to stay in place, excepting if they were running when they caught the ball, then they were allowed some leeway in which to continue moving while they slowed themselves quickly to a stop.  This rule against running with the ball was because Dr. Naismith observed that in most sports, many injuries tended to happen when the player with the ball ran around, particularly with the other team more or less attacking that player.  This way, the focus would be more on the ball, rather than the player.

As mentioned, the game was first played on December 21, 1891.  This inaugural game was played with nine players on each team and after 30 minutes total of play (two fifteen minute halves) the final score was  1-0, fitting for a game played with a soccer ball.   The lone point was scored by William R. Chase, from around 25 feet away from the basket. The thirteen rules used in this original version of basketball were as follows:

This first game was described thus:

When Mr. Stubbins brought up the peach baskets to the gym I secured them on the inside of the railing of the gallery. This was about 10 feet from the floor, one at each end of the gymnasium. I then put the 13 rules on the bulletin board just behind the instructor’s platform, secured a soccer ball and awaited the arrival of the class… The class did not show much enthusiasm but followed my lead… I then explained what they had to do to make goals, tossed the ball up between the two center men & tried to keep them somewhat near the rules. Most of the fouls were called for running with the ball, though tackling the man with the ball was not uncommon… It was the start of the first basketball game and the finish of trouble with that class.

Despite the somewhat underwhelming first game results, which was just one point away from ending in a meaningless tie, the game soon became extremely popular at the YMCA in Springfield and within a year was spreading to other YMCA’s.  Within three years, basketball started being accepted as not just a fun game to play indoors, but a legitimate sport in its own right.  The rules, of course, began being tweaked nearly from the beginning and the old peach basket was thrown out in favor of iron rims with netting as early as 1893 (though, interestingly, the first netted hoops had a closed bottom, so a long wooden dowel still had to be used to retrieve the ball for around a decade after the net was introduced until someone finally got the bright idea of just using an open ended net, so that the ball would just fall through, no stick required).  In addition to that, specialized balls began being made, instead of just using a soccer ball.  Fast-forward to today and basketball is considered one of the world’s most popular sports, being played by an estimated 300 million people.

No discussion of the origin of basketball would be complete without addressing the common alternate “conspiracy theory” origin.  This theory popped up in the 1950s, claiming that a director of a YMCA in Herkimer, New York, Lambert G. Will, actually invented the game almost a year before Dr. Naismith claimed the first basketball game took place.  The primary piece of evidence to support this claim is a photograph of what is apparently a basketball team in Herkimer dated in 1892.  Obviously this is after the game illustrated above, but what makes this picture intriguing is that the ball in the picture has 91-92 written on it, implying the team had been formed in 1891, which doesn’t necessarily mean this was before Dr. Naismith’s first game, but possibly.  There are a few problems with this, though.  First, that Lambert G. Will himself never claimed to have invented the game and further, his grandson, Rick Will claims that his grandfather always implied that Dr. Naismith had invented the game, not himself.  Thus even without the mountain of evidence that backs up Dr. Naismith’s claim, while the “91” on the ball seems curious, if Will himself claimed Dr. Naismith invented it, then one would tend to believe Dr. Naismith’s story of the origin of basketball and the first game.

Now, to be clear, while Will’s descendants don’t claim that Lambert G. Will invented the game, they do claim that he gave Dr. Naismith several suggestions on improving the game as Dr. Naismith had contact him about the new game, asking for suggestions.  However, as another of his grandson’s, Lawrence Will, stated, “He came up with some ideas, but I suspect he wasn’t the only one.”  What his exact suggestions might have been are unclear, some, like Lawrence Will, indicate that he only made a few suggestions, some of which were adopted, perhaps because of Lawrence Will’s suggestion or perhaps because of another who made the same suggestion (a lot of people in the early days of the sport helped tweak the game).  Others go so far as to basically state that Lawrence Will came up with almost every key feature of the game including: passing by hand (these individuals claim Dr. Naismith’s game only included passing by foot with, oddly, a medicine ball, not a soccer ball being used, which obviously makes no sense in the “don’t get people injured” rule for developing the game); introducing a bounceable ball and dribbling; the metal rim; the net (knitted by his wife no less),;standardizing the basketball court; and giving the idea for an open bottom on the net so the ball could fall through.  Obviously this seems highly unlikely as it flies in the face of a lot of direct evidence in the Dr. Naismith camp and Will’s descendants on the whole make no such significant claims based on what they know of Lawrence Will’s part in the development of basketball.  In the end, it is likely that Will had a part through correspondents with Dr. Naismith in the development of the early game after it was introduced, but it seems pretty clear that he did not invent it, as some basketball conspiracy theorists claim.