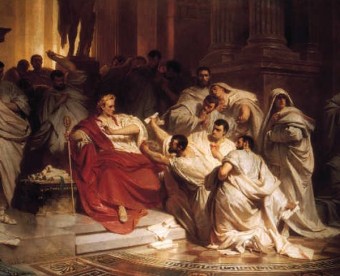 Today I found out Julius Caesar was once kidnapped by pirates and convinced them to up their ransom demand.

A 25 year old Julius Caesar was sailing the Aegean Sea when he was kidnapped by Sicilian pirates.  The pirates who captured him initially asked for a ransom of 20 talents of silver (which is about 620 kg of silver or $600,000 by today’s silver prices).  According to Plutarch, rather than send his associates off to gather the silver, he instead laughed at the pirates and demanded they ask for 50 (1550 kg of silver), as 20 talents of silver was too small of a ransom for himself.

The pirates, of course, agreed and Caesar sent some of his associates off to gather the silver, which took 38 days to accomplish.  Now nearly alone with the pirates (only keeping two servants and one of his friends), rather than cower, he instead took the route of treating them as if they were his subordinates.  He even went so far as to demand they not talk whenever he decided to take a nap or go to sleep for the night.  He spent most of his time with them composing and reciting poetry, as well as writing speeches.  He would then recite the works to the pirates.  He also joined in with playing various games with the pirates and participating in their exercises, generally acting as if he wasn’t a prisoner, but rather, their leader.  The pirates quickly grew to respect and like him and allowed him the freedom to more or less do as he pleased on their island and ships.

While he was friendly with them, he also didn’t appreciate being held captive.  As such, he swore to them that he would hunt them down and have them crucified, once the ransom was paid.  Despite the fact that at that time he was just acting as a private citizen, once he was free, he manage to quickly raise a small fleet which he took back to the island the pirates had held him at.   Apparently they hadn’t taken his threats seriously, because they were still there when he arrived.  He captured them and took back his 50 talents of silver, along with all their possessions.

He next delivered the pirates to the authorities at the prison at Pergamon and then traveled to meet the proconsul of Asia, Marcus Junius, to petition to have the pirates executed.  The proconsul refused, wanting to sell the pirates as slaves and take the spoils for himself.  Unhappy with this outcome, Caesar traveled back to Pergamon where the Sicilian pirates were being held and ordered that they be crucified under his own authority, which was subsequently done.  Once again, the adage “Never go against a Sicilian when death is on the line” was proven false….