January 2, 2013 Scott
Ken J. asks: How is the calorie content in food determined? 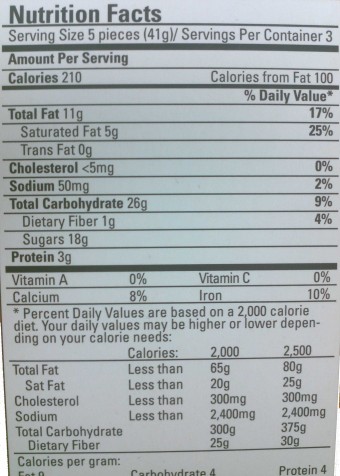 First, let’s make sure everybody here understands what a calorie is. A calorie is just a measurement of energy- the amount of energy needed to raise 1 gram of water 1 degree Celsius at standard atmospheric pressure. This makes sense when talking about calories in food. Food provides energy and our bodies need this energy to function throughout the day. I’m hoping to burn about 100 calories while writing this response. If not, this 100 calorie snack pack won’t be as health conscious as I thought and will go straight to my hips!

Second, it’s also important to note that Calories in food are actually measured in kilocalories, so 1000 actual calories for every 1 Calorie listed.

Manufacturers used to measure calories using a “bomb calorimeter”. This process involved placing the food source in a sealed container filled with water. They would then burn the food with electrical energy. After the food had completely burned up, they would measure the water temperature to see how many degrees it was raised and thus how many calories used.

In 1990, under The Nutrition Labeling and Education Act of 1990, the FDA began requiring food manufacturers to label the amounts of nutrients and calories contained in their products. This act resulted in moving away from the bomb calorimeter method for determining the number of calories in food. One reason for this was to make it easier and less expensive for manufacturers to meet the standard. Another was that the bomb calorimeter method measures all available calories in the product. Since most foods contain indigestible components, like fiber, that pass through our system and get excreted in the form of bum brownies, this would lead to a consistent overestimation of ingested calories using the bomb calorimeter. Instead, they used an easier method known as the Atwater system.

This approach adds up the calories available through the energy containing nutrients in the food item, like protein, carbohydrates, fats, and alcohols. They use standard reference tables for common ingredients based on their energy densities.  Things like 4 kilocalories for proteins, 4 for carbohydrates, 3 for organic acids, 9 for fats, and 7 for drinkable alcohols (ethanol). No wonder all that beer gives me this soft belly! It has over 1.5 the calories per mass as proteins and carbohydrates (well worth it though).

So for a specific example, let’s say that tasty snack you have before you jump on the treadmill contains 5g of protein, 10g of carbohydrates, and 15g of fat. The label on the package would then read 225 Calories (or 225,000 calories for those who can’t stand over simplification which results in misconceptions!)