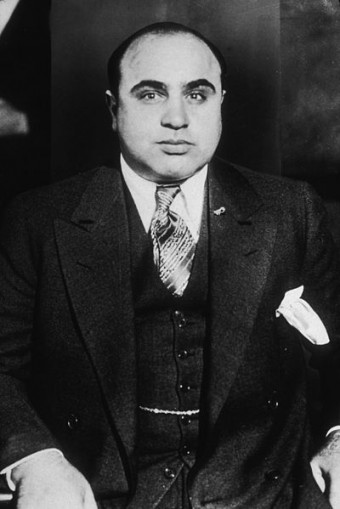 In the 1920s, gang warfare threatened the streets of Chicago. In the midst of prohibition, mobsters were making a killing by providing alcohol to thirsty cityfolk from all walks of life. The infamous Al “Scarface” Capone ruled with an iron fist, and at his peak was earning an astounding $60 million per year (about $700 million today)—and yet he controlled just half of Chicago. By 1929, only one man posed any real threat to his monopoly on Chicago crime: George Moran, who headed his own gang of criminals.

Moran had a background as a petty thief. He was stocky and powerfully built, but didn’t have a reputation for being the brightest crayon in the box. He was jealous of Al Capone and wanted to take over the south side of Chicago just as much as Capone wanted to take control of the north side.

Just two years before the massacre, the north side was controlled by Dion O’Banion, a man thought to have killed some sixty people during his reign. O’Banion controlled one of the largest breweries in Chicago—nearly as large as Capone’s—and the north side contained a prime selling market. The people living there were generally somewhat richer than those on the south side, and came from German and Irish backgrounds, making them stereotypically heavy drinkers. It’s easy to see why it looked so favourable to the ambitious Capone, who wanted to get his hands on the money such a market would bring him.

On February 14, 1929, the rivalry came to a head when four men burst into the garage on Clark Street that had been used by Moran as a headquarters for his illegal dealings. By this time, Moran was the leader of the north side gang as O’Banion and other senior members had all been murdered.

Two of the shooters were dressed as police officers, and it looked as though they were conducting a raid. There were seven of Moran’s cronies in the garage, and they were asked to line up against the wall. After a moment, the four other men opened fire, putting around 90 bullet holes in the seven men. The shooters were seen escaping in a black Cadillac.

Though they had taken care of a few of Moran’s prized killers, Moran himself had decided to sleep in that morning and was absent from the incident. It’s likely that the killers would have picked another day to do the deed had they known this, but another man who looked a lot like Moran—Albert Weinshank—was seen entering the building,. It’s thought that the shooters were given the signal to enter the building soon after Weinshank, believing that he was their main target, Moran.

Soon after this incident that shocked the nation for its brutality, accusing fingers pointed at Al Capone, the natural suspect given that his rivalry with Moran was no secret. Conveniently for Capone, he was on vacation in Florida at the time of the shooting, providing him with an excellent alibi. He even met with a solicitor that morning, which meant he had a witness who could testify about his location. No one believed he had nothing to do with the murder of seven rival gang members, but without any proof, Capone went unpunished.

Investigators turned to the Purple Gang in Detroit where Moran had been hijacking some of Capone’s liquor shipments. The mugshots of several gang members were picked out by women who claimed to have taken them in as roomers days before the shooting, directly across the street from the Clark Street garage. These men, too, ended up being cleared by the police.

They had one strong lead: minutes before the massacre occurred, a truck driver nearly ran into what he thought was a police car. The driver of the car was in uniform and missing a front tooth. The description matched Fred “Killer” Burke, a member of the Egan’s Rats gang which was suspected of helping Al Capone with several murders. Unfortunately for the police, Burke proved to be a slippery rat to catch.

Next on the list of suspects were Capone’s right-hand men John Scalise and Jack McGurn. Both were formally charged, but Scalise never made it to his trial. In May 1929, Capone murdered Scalise himself. The charges against McGurn were dropped due to a lack of evidence.

In December that same year, the main suspect, Burke, was finally found after he killed a police officer named Skelly in Michigan. When his bungalow was raided, police found a bullet proof vest along with two Tommy guns that were identified as the guns that had been used in the massacre. Unfortunately for police, besides that, there was scant evidence to convict Burke of direct involvement in the deaths, and none of his three accomplices were identified. However, Burke was convicted of the murder of Officer Skelly, and he ended up dying in prison in 1940.

While Moran escaped the carnage, he was notably absent from big crime following the massacre. Perhaps the bloodshed had shocked him as it had shocked the rest of the nation. Whatever the case, with Moran out of the way, Al Capone was free to take over the rest of Chicago.

Despite his illegal dealings, or perhaps because of them given that he was supplying people with alcohol, Capone became popular in Chicago. However, he was finally taken down in 1931 for income tax evasion and was sentenced to ten years in prison. By 1939, a bad case of syphilis caused Capone to develop dementia, and he was released from prison because it was felt he was no longer a threat. He died of heart failure in 1947.  Moran was arrested for stealing $10,000 from a bank and died in prison in 1957. The garage where the massacre occurred was demolished in 1967.