This Day in History: After Facing One Batter, Babe Ruth Punches an Umpire for Throwing Him Out of the Game. Ruth’s Replacement Then Throws a No-Hitter 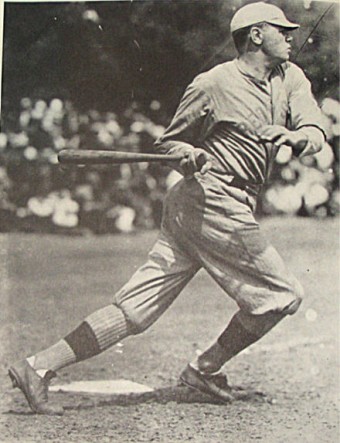 Babe Ruth in 1918 apparently before being introduced to hot dogs

On this day in history, 1917, Babe Ruth was on the mound for the Boston Red Sox at Fenway Park against the Washington Senators.  He threw four straight balls, at least as far as the umpire, Clarence “Brick” Owens, was concerned, walking Ray Morgan.  Ruth thought the second and the fourth pitch were both strikes, so charged the umpire and reportedly yelled at him, “If you’d go to bed at night, you *expletive*, you could keep your eyes open long enough in the daytime to see when a ball goes over the plate!”

As you might imagine, the umpire didn’t take too kindly to this and told Ruth that if he didn’t shut up and get back to the mound, he’d be thrown out of the game.  Ruth then yelled at him, “Throw me out and I’ll punch ya right in the jaw!”  Owens then threw him out and Ruth attempted to punch him in the jaw… He missed though, and instead hit a glancing blow behind the umpire’s ear, but nevertheless knocked Owens down.

While today this sort of thing would have landed the player in question in pretty major hot water, it wasn’t really all that uncommon for fans or players to attack umpires in that era, though still looked down upon in the American League and National League (not as much in many other leagues of the day). For this act, Ruth was fined $100 (about $1600 today), given a 10 game suspension, and forced to give a public apology.

What made this particularly attacking of an umpire important was that when Ernie Shore came in to replace Ruth on the mound, the catcher, Sam Agnew, (who incidentally replaced catcher Chester “Pinch” Thomas who was also ejected with Ruth), threw out the runner on first trying to steal second.  Shore then retired the next 26 batters in a row without giving up a hit or a walk, winning the game 4-0.  As such, this was ruled to be a “perfect game” because Shore had been on the mound for all 27 outs, though in the 1990s, it was downgraded to simply a “combined no-hitter”.

“Brick” Owens was no stranger to being attacked for his umpiring and saw much worse before becoming an NL and then AL umpire, where the life of an umpire was relatively safe comparatively.  As a 16 year old, he had been attempting to make a go of becoming a major league baseball player himself, but accidentally shot himself in the left hand during a fourth of July celebration.  This stopped him from playing in the game he intended to that day, but he did go ahead and umpire most of the game after the original umpire quit mid-match.  Owens quickly learned he could make a little money doing this, starting out at 50 cents a game ($15 today) and within a year was pulling in $5 a game and while still just 17, he was given a contract of $75 a month (about $2200 today) from the Northern League.

This may seem like good money for a 17 year old and a great job, getting some fresh air, watching games, making the bucks, but in fact it was not back then.  For instance, in one game the team batting was mounting a comeback, only to have Owens call three strikes in a row on their batter, ending the inning and the game.  Today, the players and fans would then just walk off disappointed, no harm done.  What happened then was that the batter attacked Owens.  While Owens was defending himself against said batter, a fan ran onto the field, picked up the bat, and swung and connected with Owens’ head. This kind of worked out for Owens though as there was no permanent injury and the father of the fan paid Owens $750 not to press charges, which was about equivalent to Owens’ annual salary.  Given he got beat up all the time without getting money out of it, this worked out.

Attacks didn’t just come in the heat of the moment on the field either.  After one game where Owens had ejected a player, the player met him back at his hotel room and attacked him there.  After another, he was sitting back in his hotel when a mob of fans came after him and refused to disperse, even after police arrived, until Owens was handed over to them.  In order to get him out of the hotel, police had to take him over the rooftops, as the mob followed, and directly to the railroad station where they put him on the train out of town before the mob could get him.   In another similar instance, he was attacked by 50 fans, but this time didn’t get away.  They beat him until police managed to get between Owens and the fans. In another similar instance, a police officer trying to protect Owens from a mob of fans got his finger bitten off.

At this point, you might be wondering if Owens got the nickname “Brick” because he was tough as a brick.  Partially, but also because there were actual bricks involved.  In 1903, in a game in Pittsburgh, fans were upset with a call he made and began throwing bricks at him, including striking him in the head with one.  Despite this, he was back at the job just a couple days later, at which point one of the baseball players at the game, Charley Lyons, gave him the nickname “Brick”.