December 13, 2013 Kathy Padden
Becky asks: Why is there a dance called “Sadie Hawkins”? Was this a real person? 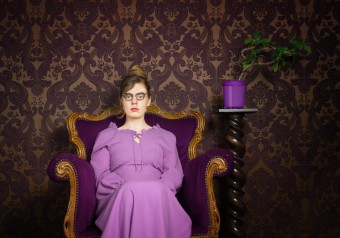 Sadie Hawkins’ renown, which evolved into an American folk-holiday in some places, doesn’t really originate from a dance, but rather from a race, as we shall soon see. Sadie was the product of the fertile imagination of cartoonist Al Capp. She was a character in his popular cartoon Lil’ Abner, set in the hillbilly town of Dogpatch, that began its wildly successful 40 year run in 1934.

The way Al tells it, Sadie was the daughter of Hekzebiah Hawkins, one of the town’s first settlers, who had the dubious distinction of being the “homeliest gal in all them hills.” After waiting not-so-patiently for 15 years for a suitor to show up at her door, not a single prospective husband arrived to court her. With each passing year, Sadie became more and more panicky, as did her father, who did not relish the idea of supporting a spinster daughter for the rest of her days.

So, figuring he had nothing to lose, he called all the unmarried men of Dogpatch together and declared it Sadie Hawkins Day. In a reversal of Atalanta’s race in ancient Greek mythology, the race placed Sadie in hot pursuit of the town’s bachelors; the “lucky” chap she managed to catch became her lawful wedded husband. Or, as her Paw explained it, “When ah fires [my gun], all o’ yo’ kin start a-runnin! When ah fires agin—after givin’ yo’ a fair start—Sadie starts a runnin’. Th’ one she ketches’ll be her husbin.” Pure poetry.

The rest of the spinsters in Dogpatch thought the race was an excellent idea, and insisted upon making Sadie Hawkins Day a yearly and mandatory event, much to the horror of the bachelors in town, who apparently had no say in the matter. According to the strip, if a woman caught a man and dragged him, presumably kicking, screaming, and crying for mommy, over the finish line before the sun had set, by law he had to marry her. This had overtones of a caveman clubbing a woman and dragging her back to his cave, and was as close to women’s lib as you’d get at the time in popular entertainment.

This entire Sadie Hawkins Day story line was a plot device concocted by Al Capp for the romance between main characters Abner and Daisy Mae, which had a bit of a Ross and Rachel from “Friends” quality to it. Eventually, Capp put everyone out of their misery and allowed the two characters to finally marry.

The dance didn’t appear in the strip until a bit later. The Sadie Hawkins Dance took place on the evening before the race, and the spinster girls traditionally wore hob-nailed boots to “unintentionally” stomp on the feet of the single men in attendance, which unfortunately (for them) might adversely affect their ability to run the next day during the race.

Sadie Hawkins Day as a popular culture phenomenon was all the rage on college campuses by 1939. According to Life magazine, over 200 colleges were celebrating a Sadie Hawkins Day that year, and it was obvious that the tradition was quickly gaining in popularity with the nation’s young people.

The question is – why? One reason could be that as the nation was taking its first strides out of the Great Depression, a down-home low-cost activity like Sadie Hawkins Day was something that all could participate in, without the need to rent a tux or buy a gown as prom or homecoming would entail. There was also the naughty novelty of girls inviting boys for a social outing.

Compared to the Roaring ‘20s, the ‘30’s were considerably more sexually repressed. Gone were the flappers, bee-stung lips and bootleg whiskey. The depression brought with it a sober prissiness that made the very idea of a woman openly pursuing a man deeply offensive to many. But an approved activity such as Sadie Hawkins Day – where a lady could state her choice with impunity and not be labeled a Jezebel – while at the same time men could pretend to be horrified while secretly being titillated – that’s a situation where everyone wins!

By 1952, it was reported that Sadie Hawkins Day was celebrated at over 40,000 different locations. In that year, Capp wrote:

It’s become my responsibility [to include Sadie Hawkins Day every year in the strip.] It doesn’t happen on any set day in November; it happens on the day I say it happens. I get tens of thousands of letters from colleges, communities, and church groups, starting around July, asking me what day, so they can make plans.

Eventually, it morphed into an event of an entire day’s duration that fell on the Saturday after November ninth.

For today’s young women, Sadie Hawkins Day doesn’t seem all that relevant anymore. But for a few decades in the middle of the twentieth century, it served as a social bridge between the years when women rarely left the home and the sexual revolution.