Tibetan Monks Can Raise the Temperature of Their Skin Through Meditation 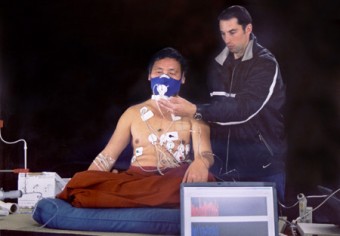 Today I found out that some Tibetan monks can control the temperature of their skin through meditation.  Specifically, they have been shown to be able to raise their skin temperature, measured from their toes and fingers, as much as 17 degrees Fahrenheit, while their core temperature stays normal.

The scientists also got a chance to document the monks spending a night out on a rocky ledge in the Himalayas.  The monks were dressed in their simple wool robes with no extra insulation and slept on the cold rocks separated from one another.  The altitude was 15,000 feet and the temperatures reached zero degrees Fahrenheit as they slept, apparently comfortably, through the night.  With as little insulation as they were wearing and laying on the cold rock separated from one another, this should have killed the monks.  But they were all fine and the cameras didn’t even catch them shivering at any point. When they woke, they walked calmly back to their monastery, not seeming to notice the cold at all, unlike the scientists and camera crew who were all bundled up and freezing by morning.

It is not yet known how the monks manage to generate the heat, but magnetic resonance imaging scans of the monks brains while they meditate have shown “marked differences in blood flow to the entire brain”, Benson explains. “At the same time, certain areas of the brain became more active, specifically those that control attention and autonomic functions like blood pressure and metabolism.”

The ability to sustain themselves in extreme low temperature and low oxygen environments by raising their skin temperature and lowering their metabolism drastically, would be particularly useful for NASA in missions such as traveling to Mars.  If their astronauts could do this, it would drastically decrease the amount of oxygen and energy needed in such a voyage.  *queue Space Monks*