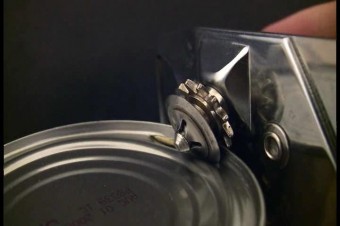 Today I found out the can opener wasn’t invented until 48 years after the invention of the can.

In 1795, Napoleon Bonaparte was having problems with his supply lines. Specifically, they were too long for the food preservation methods at the time, making it difficult to adequately supply his troops with needed food. Thus, he offered a 12,000 franc prize for anyone who invented a preservation method that would allow his army’s food to remain unspoiled during its long journey to the troops’ stomachs.

In 1810, Nicholas Appert won the prize for his method of keeping food fresh by sterilization.  Although he didn’t understand exactly why it worked, Appert found that food stayed fresh for long periods of time if you could seal it tightly in a container, in his case a glass jar, and then heat it up. Later that year an inventor, Peter Durand, received a patent from King George III for the world’s first can made of iron and tin. Combined with Appert’s sterilization method, long term canned food preservation became possible.

While the method for keeping food fresh was now there, Napoleon’s troops had difficulty actually getting at the food. The early cans were far too thick for any dedicated can opener. As the Donner Party taught us though, hungry men will find a way to eat. So as you might imagine, early cans were opened by brute force. The age old “smash it with a hammer and chisel” technique was commonplace.  Not the best method in the world for keeping one’s food un-mashed, but nevertheless got the job done.

These early cans could only be produced at a rate of about 6 per hour, though, even with the most skilled workers, so they weren’t widely adopted by the masses in the beginning. Fast forward a few decades and, in 1846, Henry Evans invented a die method for making a can from a single motion. This increased production to about 60 cans per hour, a drastic improvement over previous methods. One year later, Allen Taylor patented his machine stamped method of producing tin cans. As these methods were perfected, allowing for thinner and more rapidly produced cans, cans began to be more widely used and, because of how thin they were becoming, it became possible to produce a dedicated and practical tool for opening them.

The first such tool popped up in 1858, almost a half century after the can was invented, when Ezra Warner patented the first dedicated can opener. This design became known as a “bayonet and sickle” type can opener. It worked by puncturing the can with the bayonet portion, and then the sickle portion would remove the lid. The opener left extremely rough edges and so never really caught on, long-term.

Another early design, in 1866,  was made by J. Osterhoudt.  His patented design combined the opener and the can in one.  Specifically, it was a tin can that came with its own key opener. This is similar to the kind you still see sardines packed in today.

The can opener that most of us still use today was invented in 1870 by William Lyman. His original design had a simple wheel that rolled around the rim of the can, cutting it open as it went. The Star Can Company made the final design change to this beloved method by adding serrated edges to the wheel.  The first electric version of this design wasn’t produced for over a half century later, in December of 1931.

The Napoleonic Wars didn’t just help spark the invention of a better food preservation method, but also of the modern day pencil.  During this time, France wasn’t able to import pencils from Great Britain, which had the only supply of pure solid graphite in the world.  Nicholas Jacques Conté, who was an officer in the army, discovered that if you mix graphite powder with clay, you can then form this mixture into sticks and fire this substance in a kiln.  You also can vary the clay/graphite ratio to achieve different levels of hardness and darkness.  For the first time, this allowed for the making of high quality pencils without the need for Britain’s pure graphite sticks.  This also is more or less exactly how pencil cores are made to this day.  Read more about Conté and why you used to have to use #2 pencils on scantron forms here.

tagged with can history, can opener, fascinating facts, history, interesting facts, who invented the can