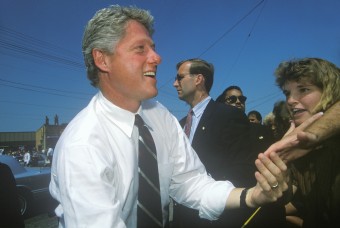 Although best known for his planning of the September 11, 2001 terrorist attacks, Osama bin Laden has a long history of terrorist activity against the United States dating back to 1992. In addition to bombings and other mass killings, he may have been developing another specialty as well – presidential assassinations, though as you’d expect with things of this nature, hard evidence is difficult to come by.

While in Manila, Philippines for the Asia-Pacific Economic Conference (APEC), the 42nd President of the United States, William Jefferson Clinton, may have come within minutes of falling prey to a bin Laden assassination attempt.

According to reports, bin Laden, who was then residing in Afghanistan, had apparently arranged for a bomb to be planted on a bridge that was on the intended route of President Clinton’s motorcade. As reported in The Telegraph:

He [Clinton] was scheduled to visit a local politician, his route taking him across a bride in central Manila. But as the presidential motorcade was about to set off, secret service officers received a ‘”crackly message in one earpiece” saying intelligence agents had picked up a message suggesting an attack was imminent.

President Clinton’s route was changed, and later a bomb, attributed to bin Laden, was reportedly found under the bridge. Reporting of the events at the time downplayed the direct threat to the President, noting that the bombs were found several days before the conference was to begin and placed them at an airport and a military base – not the bridge.

The assassination version of the story, first revealed in Ken Gormley’s book, The Death of American Virtue: Clinton vs. Starr, relies on information allegedly provided by a former director of the Secret Service, Louis Merletti. Although I can find no record of Treasury officials confirming the report, reputable news organizations, like the Los Angeles Times, accept its validity.

On the same day 19 hijackers flew two planes into the World Trade Center, one into the Pentagon and a fourth crashed into a field in Shanksville, Pennsylvania, another group of terrorists may have been trying to assassinate our 43rd President, George Walker Bush.

The day before, on September 10, 2001, George W. Bush had arrived at Longboat Key, Florida (in Sarasota Bay) to spend the evening with his brother, the then-governor of Florida, Jeb Bush, at the Colony Beach and Tennis Resort. Early the next morning (before the attacks), a group of unusual visitors allegedly tried to meet with the President. As first reported by The Longboat Observer:

A van occupied by men of Middle Eastern descent had pulled up to the Colony stating they had a “poolside” interview with the President. . . . The self-proclaimed reporters then asked for a Secret Service agent by name. Guards from security relayed the request to the receptionist, who . . . . gave the phone over to a nearby Secret Service agent, who [did not know] of an agent by that name or of any poolside interview. The agent . . . turned them [the occupants of the van] away from the premises.

By September 26, 2001, the FBI had become interested in the story and investigated. They reportedly found a witness who saw a van at 8:50 a.m. “with two men of Middle Eastern descent ‘screaming out the windows, “Down with Bush” and raising their fists in the air.'” The first plane hit the World Trade Center at 8:46 a.m.

Later reporting has called the Observer’s account into question. According to the St. Petersburg Times, the primary witness relied upon by the Observer denies he ever told the story of “men in a van seeking an interview.”

Nonetheless, all agree that at least two of the hijackers had been in West Florida in the months leading up to the attack. Not only had they taken flying lessons at a Venice, Florida flight school, Mohamed Atta has been positively identified as having been in the Longboat Key Holiday Inn on at least three occasions several weeks prior to the attack.

Former President Bill Clinton Was Minutes Away from Assassination

Image via spirit of america / Shutterstock.com