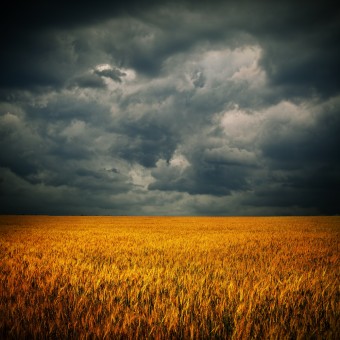 You might have heard grandma or grandpa predicting a storm because they “could feel it in their bones” and when a storm hit you probably thought they’d been watching the weather channel. Turns out, their joints *probably* do get a little achy when it’s about to rain.

“Weather pain” is a sensation that was noticed by Hippocrates back in 400 B.C. Today, people suffering from arthritis are still complaining about worsening pain before an impending storm, and scientists are still puzzled about why exactly stormy days cause more discomfort than other days.

There have been several studies that have shown a correlation between bad weather and increased pain. Changes in barometric pressure, temperature, and humidity in particular have been shown to increase arthritic pain, along with pain from headaches, jaw aches, fibromyalgia, and numerous other sources of discomfort.

That said, other studies have been inconclusive about the whole issue of “weather pains.” For instance, Amos Tversky, a Standford psychologist, studied 18 rheumatoid arthritis sufferers in the mid-1990s for a year and found no connection between increased pain and bad-weather days. According to Tversky, the association was all in the patients’ heads: “People’s beliefs about arthritis pain and the weather may tell more about the workings of the mind than of the body.”  Of course, that’s an amazingly small sample-size to be drawing any definitive conclusions from either way.

If the increased pain really is “all in the head,” then it’s a widespread epidemic. Many health professionals, from personal trainers to rheumatologists, have indicated that they receive more complaints on particularly bad-weather days than any other days during the year. According to occupational therapist Aviva Wolff, “The more dramatic the weather change, the more obvious it is.”  Of course, all of those complaints could still be spurred on by people’s minds playing tricks on them. This is just anecdotal evidence, and we humans certainly are amazingly good at convincing ourselves of things, even when reality doesn’t match up.

One group of scientists decided to eliminate human error by testing out the bad-weather theory on a group of guinea pigs instead. The guinea pigs were induced with back pain. In low barometric pressure, they exhibited “signs of increased pain by pulling in their hind paws.” Several other similar studies on animals have shown the same type of results—increased signs of pain are exhibited by animals when bad weather is pending. So, it would seem that there is some truth to the phenomenon.

Yet, throwing another curveball into the theory, not everyone who suffers from arthritis or other aches and pains complains of increased pain during storms. Another point for the “all in your head” team? Rheumatologist Patience White doesn’t think so. Rather, she says that people who feel more pain during bad weather usually have “some sort of effusion,” which means they have more fluid build-up around joints. This could account for the people who can’t predict the weather based on how much they’re suffering that day.

At this point, scientists aren’t exactly sure why changes in barometric pressure, humidity, and temperature cause additional pain. They do believe that falling barometric pressure is probably the biggest culprit. When barometric pressure falls just before a storm, it changes the pressure experienced by the joints. When that happens, the joint expands ever so slightly, which then puts pressure on the surrounding nerves and tissue, resulting in pain.

People who come from a climate where the weather is apt to change tend to find relief from their pain when they visit a warmer, drier climate less prone to significant weather changes. However, one study showed that 60% of people believed that the weather affected their level of pain no matter where they lived in the United States, with its many different climate regions.

Robert Jamison, a professor at Harvard Medical School who conducted the study, said, “…if you live [in a warm, dry climate] full time, your body seems to acclimatize and you become sensitive to even subtle weather changes.”  Of course, it could be that there is a mix going on here of some people’s weather pains being in their heads and in other cases it being a very real phenomenon caused by environmental factors.

Perhaps one of the things throwing scientists off is the idea that “dampness” affects arthritic pain. This is probably not the case. As Donald Redelmeier, a professor at the University of Toronto, explains, “The skin surrounding joints is rather impervious to water and most people stay dry indoors during rain anyway…”

Of course, others aren’t so sure, stating that the evidence is “shaky” and that it’s nearly impossible to get an unbiased results when people are so convinced that their joints really are affected by weather.

In the end, while it is possible some of these weather pains are just a figment of people’s imaginations, enough animal studies seem to indicate it’s not complete fiction. So, don’t ditch your daily TV weather reports, but next time grandpa complains that it’s going to rain on a nice, sunny day, pay attention—he might just be feeling the drop in barometric pressure that accompanies a storm.