The Domino Theory and its many uses throughout the years 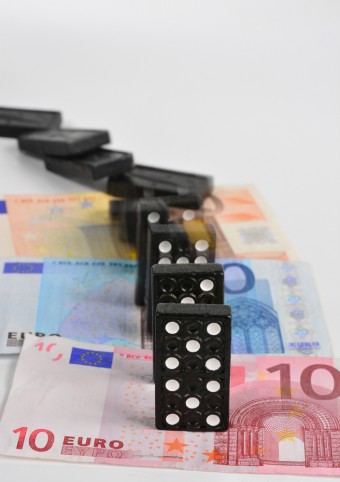 When younger generations hear the word ‘dominoes,’ they usually associate it with the famous board game, while others–especially food lovers–might connect it with a delicious pizza. For those who are more politically aware, the word probably brings thoughts of the Cold War and the threat of the spread of communism. In addition, most economists today love to use the word when referring to the debt crisis in the Eurozone.

The first time we meet the word historically, according to the Probert Encyclopaedia, it is connected to religious purposes:

“A domino is a kind of hood worn by the canons of a cathedral church. Later the name was given to a mourning-veil for women and later still to half-masks worn by women when travelling or at a masquerade, for disguise. A domino was a masquerade-dress worn for disguise by ladies and gentlemen, and consisting of an ample cloak or mantle with wide sleeves and a hood removable at pleasure. It was usually made of black silk, but sometimes of other colours and materials.”

How exactly the widely-known board game that we meet in Italy during the 18th century connects to any of the above definitions, we don’t know, but it’s speculated that Italian missionaries who traveled to China probably saw a similar type of game and brought it back to Italy. Once in Italy, it mixed with local elements and the combination gave us what we know as dominoes today.

The domino effect, which usually takes place in that specific game, is of particular interest. It is a chain reaction (in linear order) caused when one small piece falls. This effect was the inspiration for former president of the United States, Dwight D. Eisenhower, when he gave his famous “domino theory” speech on April 7, 1954,

Finally, you have broader considerations that might follow what you would call the “falling domino” principle. You have a row of dominoes set up, you knock over the first one, and what will happen to the last one is the certainty that it will go over very quickly. So, you could have a beginning of a disintegration that would have the most profound influences.

Most historians agree that the specific theory was firstly proposed by another American president, Harry S. Truman. Almost immediately after the end of WWII, the Cold War began. The idea that the conversion of a free, noncommunist nation into a communist state would trigger a chain reaction in neighboring countries became the official U.S. foreign policy at the time. For this reason, Truman sent military forces and aid to Greece and Turkey in order to prevent the expansion of communism into these countries from the increasingly communist Balkan states. The Domino Theory, or Effect  as it is also known, was created in the late 1940s, but became widely known only a few years later with Eisenhower’s speech in 1954.

It would reach its peak in the early 1960s when Eisenhower–who originally claimed that he would do almost anything to avoid turning his chair and country over to Kennedy–managed to convince him (Kennedy)  about the disastrous effects that the domino theory could have for the U.S. and the western world as a whole. It was he who advised Kennedy that the “fall” of Laos to the communists-hence of Vietnam-would cause a chain reaction and the fall of the whole of Southeast Asia, something that would cause a serious security threat for the western world.

The specific theory, however, was proven in the aftermath of the Vietnam War to be incorrect as the alteration of Vietnam into a communist state did not cause a chain reaction or allow the communists to “conquer” the whole of Southeast Asia. While in the game, the fall of a single domino may cause a chain reaction, in reality, that political theory had failed miserably.

Despite the lessons learned from Vietnam, in the early 1980s, the domino theory was used again to justify the Reagan administration’s interventions in Central America and the Caribbean. This time, people around the world were more politically aware and suspicious and openly challenged the American government’s decisions by implying that the government was using the domino theory to hide other political and financial interests.

For many years after the Reagan administration, the use of the domino theory was restricted to the game—at least in the western world. However, it was used again during the Eurozone crisis in 2009. This time, it was used by the world’s biggest banks and the governments of the world’s most economically powerful nations. This crisis was preceded by the U.S. and European banking system predicament, which mutated into the debt storm that brought citizens of weaker Eurozone  economies, such as Greece, Italy, Spain, Portugal and Ireland, to the brink of bankruptcy.

During these crises, the governments of all the involved states tried to solve the problem by using memorandums and propping up failed entities, but recession after recession occurred across the globe, and unemployment and poverty rates exploded. The governments tried to justify the political economic policies by pointing out the high-risk of a chain reaction from one country’s economy to another- a new domino theory, which could cause a global, systemic perfect storm of economic collapse.

Whether or not this is correct and whether the policies that have resulted are good or bad no doubt are topics that will have many books written on them in the coming years, and even after decades the full ramifications of the policies will likely not yet be fully known.  Of course, the overarching idea here is to eventually fix the flawed system after applying the Band-Aid to stop the supposed Domino Effect. But even if there really would be a Domino Effect in this case and the policies ultimately work in the short term, humans tend to be reactionary.  As the bleeding slows from the Band-Aid, we tend to get comfortable and forget about putting real effort into actually fixing what really caused the last downturn.  Thus, stock crashes, oil crises, and other seemingly cyclical major economic catastrophes continue to happen over and over again, often for the exact same reasons as the times before.

As a champion of rooting out inefficiencies in systems, Henry Ford, once said:

Most people spend more time and energy going around problems than in trying to solve them.