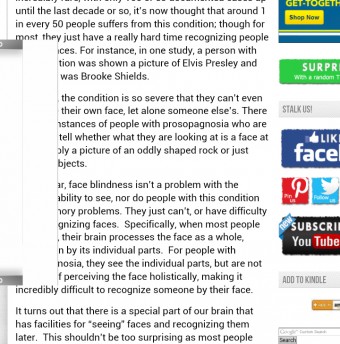 Recently I’ve been getting emails from people saying the ad unit to the left of the content is sometimes covering part of the content (as seen in the picture there to your right).

Despite my sincerest efforts, I’ve not been able to replicate this issue on any computer / device and browser combination I’ve tried (and I’ve tried many).  From reports so far, it *seems* to be only on certain mobile devices (based on screenshots people have sent), but I’ve tried it on everything from several old phones of various sizes/types with ancient browser versions to brand new ones.  So far, for me, it shows up exactly as it should every time with the left ad unit correctly positioned to the left of the content, rather than covering it. 🙂

Obviously without being able to replicate the problem, It’s extremely hard to fix, or to even know if it’s an ad positioning problem for certain browser(s) or simply one particular advertiser not playing nice (which sometimes happens and in those cases is notoriously difficult to track down among many hundreds of advertisers).

So on that note, if you’re seeing this issue, if you could either leave a comment below or email me, and let me know the device you’re using, OS, and browser, I’d very much appreciate it.  Also, if you’re technically inclined enough to know how to find the version numbers for the OS and browser, that information would also be very helpful, as would a screenshot, if possible.

I’ll try and get this issue fixed as soon as possible.  Thanks!