This Day in History: December 17th 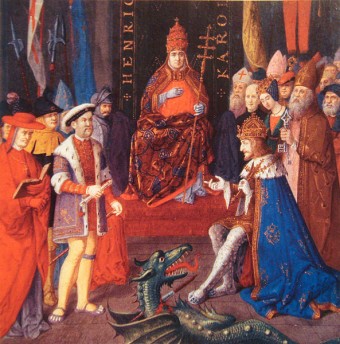 When Pope Paul III excommunicated Henry VIII on December 17, 1538, it hardly came as a surprise. It was simply the inevitable outcome of a political game of cat and mouse between the English throne and the Vatican that dragged on for almost a decade.

By the 1520s, Henry was having doubts about his marriage to Katherine of Aragon. Though the Queen had been pregnant on numerous occasions, she had only produced one living child, a girl named Mary. Seven years Henry’s senior and rapidly approaching menopause, the likelihood that Katherine would give birth to a male heir grew smaller with each passing year.

Henry needed a son, and wanted out of his marriage to Katherine. Since she had been briefly married to his brother Arthur, he figured he had his biblical loophole. But Katherine was the daughter of Ferdinand of Aragon and Isabella of Castile, and the aunt of Charles the Holy Roman Emperor. Not even the Pope Clement VII wanted to get on their bad side. Besides, Katherine swore her first marriage had not been consummated, and the Queen’s good character and piety was well known, pretty much rendering Henry’s argument moot.

The King’s plight became even more urgent as he had fallen in love with Anne Boleyn, one of the Queen’s ladies-in-waiting. The Pope, trying to maintain a precarious balancing act by keeping Queen Katherine’s powerful – and nearby – relatives satisfied, while also placating – and stalling – the King of England, must have known he could only pull it off for so long.

Henry’s patience finally ran out in 1533. He appointed Thomas Cranmer Archbishop of Canterbury, who granted the King his long-awaited annulment and married him to Anne Boleyn. The Pope declared their marriage invalid and ordered that Henry return to Katherine of Aragon, but the King was past caring what the Bishop of Rome had to say.

In 1534, the British Parliament passed the Act of Supremacy, which declared the King as the Supreme Head of the Church in England, heralding the end of papal authority in English affairs. The English monarch now held the same power in his kingdom as the Pope did in the rest of Europe, power no secular ruler had possessed in over a millennium.

Theologically, Henry’s move changed very little. Aside from the absence of the Pope, Catholic dogma was still firmly in place. Henry was certainly no Protestant, and many were disappointed that the King’s religious “transformation” was very much political, as opposed to spiritual.

This did not stop King Henry from plundering Catholic churches, monasteries and religious houses to fill his own coffers and those of his cronies. He even sanctioned the desecration on the shrine of St. Thomas a Becket in Canterbury, which had been a site of pilgrimage for many centuries. This was the last straw for Pope Paul III, and King Henry VIII was finally booted out of the Catholic Church for good.