The Resurrectionists and the Doctors’ Mob Riot 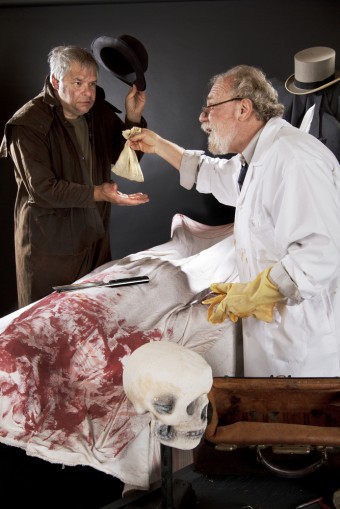 Since long before colonoscopies, mammograms and physicals (turn your head and cough), patients have had a love-hate relationship with doctors. Often uncomfortable (or downright awful), the procedures employed by physicians are frequently met with distrust and revulsion (until those methods achieve desired results).

This was no different during the early years of modern medicine when one practice in particular, human dissection, stirred the populace’s ire. Although intellectually understanding the need for anatomical study, most lay people simply abhorred the way in which bodies were obtained. This recipe for disaster led to the 1788 New York Doctors’ Mob Riot.

Anatomical Study in the 18th Century

Well into the 19th century, in order to obtain a cadaver for medical study, doctors teaching and studying anatomy had to either steal corpses or pay someone to do it. The grave robbers, known as resurrectionists, had to tread carefully. As one commentator noted:

Resurrectionists preferred to rob the graves of the poor, the unknown, and enslaved Blacks as least likely to be noticed and cause public outcry; but no graves were exempt unless there was some protection such as an iron coffin, a vault, or a watchman standing guard with a shotgun from dusk to dawn for two weeks, after which the corpse was so decomposed as to be of little use.

With legal penalties and social opprobrium at risk, resurrectionists had to work very quickly and finish the job in an hour or so. Dr. John Long Wilson described their methods in his exhaustive Stanford University School of Medicine and the Predecessor Schools: an historical perspective:

Two strong men, two large canvas tarpaulins, digging tools, and a dark lantern to light the scene but invisible from a distance, were the essentials. Dirt was removed . . .. After silently breaking through the lid of the coffin . . .  the corpse was hauled up . . . . The body was then stripped of all clothing and wrapped in the other tarpaulin. The clothes were thrown back into the coffin, the excavated dirt returned to the grave, and its surface restored exactly to its prior appearance to disarm suspicion of tampering.

In New York City in the latter half of the century, a somewhat shady doctor, Richard Bayley, and his apprentice, Wright Post, had set up two rooms in the New York Hospital for dissections. Conveniently located near what was called the African Burying Ground, anatomy students would snatch and then immediately dissect corpses (the quicker the better since preservation methods were somewhat lacking).

It has lately been the practice of a number of young gentlemen . . . to repair to the burying ground. . . . Under the cover of the night . . . they dig up bodies of our deceased friends and relatives . . . . [We] are well aware of the necessity of physicians . . . consulting dead subjects for the benefit of mankind . . . and would not be adverse to dissection . . . if it is conducted with the decency and propriety which the solemnity of such occasion requires. . . . [We] most humbly pray your honors . . . adopt such measure as may seem meet to prevent similar abuses in the future.

No official action was taken.

Later, in April 1788, children playing outside of the hospital “placed a ladder laying nearby up to the window of the dissecting room and peered inside.” One anatomy student, John Hicks, annoyed by this, brandished a dismembered arm at the children yelling: “This is your mother’s arm! I just dug it up!”

Unfortunately, one of the children had just lost his mother, and he fled home to tell his father. This “enraged father quickly gathered his fellow workers,” who were joined by a mob of citizens, and then all hell broke loose:

The concourse assembled on this occasion was immense, and some of the mob having forced their way into the dissecting-room, several human bodies were found in various states of mutilation. Enraged at this discovery, they seized upon the fragments, as heads, legs and arms, and exposed them from the windows and doors to public view, with horrid imprecations.

The five remaining students, including Post, were dragged from the hospital and only saved by the quick thinking of Mayor James Duane who ordered them jailed. As the rioters spread the story of the anatomical horrors, many medical students and doctors fled the town, and the rest, including Bayley, sought shelter in the jailhouse.

The mob’s fury went unabated for four days during which the homes of local doctors (many of whom were not involved in the dissections) were looted and vandalized. At one point, an estimated 5000 people congregated outside the jailhouse and were so threatening that the militia was deployed to protect the building and its occupants. After being “bombarded with rocks and paving stones by the surging rabble, the militia fired several volleys into the crowd.”

Ironically, although as many as 20 people died in the riot, none of them were doctors or medical students. Many rioters are thought to have succumbed to wounds that could have been treated by the doctors.

By January 1789, New York had enacted a stricter law against grave robbing, violation of which would subject the offender to standing “on the pillory or be publicly whipped, fined or imprisoned.” However, it also permitted the use of the bodies of executed criminals for dissection, which ultimately led to more reasonable anatomy laws.

According to Dr. Wilson, there were “at least 13, and possibly more, anatomy riots in the United States” between 1765 and 1852, in states including Massachusetts, Ohio, Maryland, Pennsylvania, Vermont and Illinois.

Realizing legislation provided the only alternative to grave robbing for enterprising young medical students, state legislatures acted. Beginning in 1830, Massachusetts made it legal to use unclaimed corpses for anatomical inspection, and other states soon followed. After enactment of these laws, grave robbing and doctors’ riots were no longer a problem in the U.S.