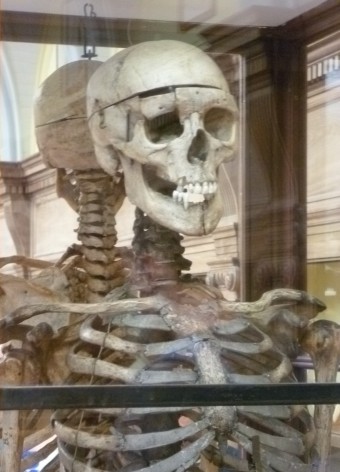 Today I found out about William Burke and William Hare: two men who murdered 15 people (though sold 16 bodies overall) over the course of a year to make extra money, selling the bodies as cadavers for university students to dissect.

These murders took place starting in November of 1827 to October of 1828.  At the time, it was very difficult for universities to get human bodies for students to dissect.  The only ones that could legally be acquired by universities were those from executed convicts.   This had once been an adequate supply, but thanks to certain legal changes that resulted in a drastic reduction of executions and thanks to the fact that the study of anatomy had become more popular as medical science progressed, there began to exist a huge shortage of human bodies.

In order to get around this problem, college professors and private tutors would sometimes pay under the table for bodies, no questions asked.  It was not uncommon for people known as “resurrectionists” or “body snatchers” to watch cemeteries and, when a fresh body was buried, they would dig it up. They’d then take any valuables that may have been left with the person.  Finally, if the body was fresh enough, they’d take it to sell.  This practice became bad enough that relatives of a deceased loved one would often stand in shifts over the grave for several days to keep the body safe from being stolen while it was still fresh.  As author Hugh Douglas noted: “(Resurrectionists) could open a grave, remove a body and restore the soil between patrols of the night watch….  Relatives of the subject could mourn by the grave the following day, unaware that their loved one was gracing some anatomy slab in Edinburgh.”

William Burke and William Hare took this practice a step further.  Rather than wait for people to die, they began a year long killing spree, providing a steady stream of bodies for Dr. Robert Knox who was a private lecturer, teaching anatomy classes to University students.

The murder spree started relatively innocently enough.  At the lodging house that Hare operated they had an elderly gentlemen named Donald who owed Hare £4 in rent when the old man died.  Knowing that one could sell a body to universities, they decided to fill the coffin with bark and steal the body to sell to make up for the loss of the rent money the dead man owed.  They originally intended to sell the body to Professor Alexander Munro of Edinburgh Medical College, but after making inquiries were re-directed to Dr. Robert Knox, a private lecturer, whose assistant instructed them to bring the body after nightfall.   When they arrived with the body, it was inspected by Dr. Knox’s assistants and Burke and Hare were offered £7.10s, which would be around £730 today, or around $1100.

Hare soon had another sick tenant on his hands, Joseph the Miller.  While Joseph wasn’t necessarily sick enough to die, the two decided they thought that he was going to eventually die.  Because he was in pain, they reportedly rationalized that if he was going to die anyways, they ought to put him out of his misery sooner, rather than later, and sell his body after the deed was done.  They did so by first getting him really drunk to the point that he passed out.  Next, one of them pinched his nose and held his mouth shut, while the other laid on his body and held Joseph’s arms and legs down, in case he should struggle.  By doing it this way, they left no mark of violence on the body, which might arouse suspicion.  It also made it appear the person had died either of illness or over-intoxication.

The two decided to repeat this process whenever sick tenants popped up.  However, they soon found that Hare’s tenants remained annoying healthy.  Being short on any other sick or dying tenants, the Burke and Hare decided to simply lure people in from the streets, initially people who wouldn’t be terribly missed; specifically targeting old people who they could easily overpower and would be more likely to be thought to have died of natural causes.

While exact details of all their murders are hard to discern, due to differing accounts of events by the two and Hare’s wife and Burke’s mistress, as well as the scant amount of direct evidence,  from here, it is generally thought their murders went as follows (reportedly receiving between £8-£14 per body):

When the story of this last murder became well known publicly, others came forward and began to connect disappearances with people coming in contact with Burke and Hare shortly before their disappearance.  However, because there was very little direct evidence that the two had actually murdered anyone (no actual witnesses), the case against them surprisingly wasn’t a good one.  It was also unclear at the time whether Helen and Margaret had actually been involved directly or even knew what had been going on.  With the lack of direct evidence, the Lord Advocate decided that Burke had been the leader and so offered Hare full immunity if he would just confess and give evidence against Burke.  Hare accepted the deal and also implicated Helen.  Burke soon cleared her, claiming she knew nothing of the murders (though this is obviously very likely false).  While it was still thought that Helen had been involved, because it could not be directly proven, the jury was forced to let her off, but convicted Burke.  When the verdict was read, Burke was reportedly overjoyed that Helen was free.

Burke was subsequently executed via hanging  just over a month later on January 28, 1829.  Seats with a view of the gallows apparently went for an extremely high price over normal executions.  When he witnessed the angry crowd constantly screaming at him, Burke reportedly rushed to the noose in an attempt to speed up the process.  He did not die immediately upon being dropped, but kicked about for around one to two minutes before finally going still. He was then left to hang for around a half hour.  After he was taken down, many in the crowd attempted to grab pieces of the rope, shavings of the coffin he was placed in, etc. as souvenirs of the event.

In the interim between his conviction and hanging, Burke wrote a detailed account of the murders, including Hare’s part in them.  After being hung, his body was sent to be dissected at Edinburgh Medical College.  This dissection was done publicly, led by Professor Alexander Monro.  In the end, Burke was the only one punished for the crimes with Hare and his wife, Margaret, and Helen McDougal getting off more or less scot-free.  Burke also swore that Dr. Knox had not known anything about where the bodies were coming from, so he too was not convicted of any crime. Although, evidence suggests he encouraged Burke and Hare to keep bringing him bodies as quick as they could acquire them.