This Day in History: November 14th 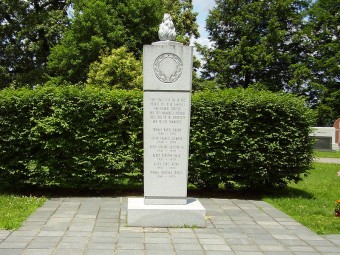 Marshall University had chartered a plane to bring its football team, the Thundering Herd, home after a game with East Carolina University on November 14, 1970. The plane hit a row of trees and careened into a hillside less than two miles from their destination – the Tri-State Airport in Kenova, West Virginia. All 70 passengers, including the entire flight crew, 37 football players, 25 team boosters, the team doctors and the coach were all lost in the crash.

The accident was just the last and most tragic in a long string of bad luck that had been plaguing the team since the early 1960s. Fairfield Stadium, which hadn’t been upgraded since before WWII, was condemned in 1962 for health and safety code violations. The team had a losing streak that spanned from the last game of 1966 to the middle of 1969. Marshall also had been suspended for more than 100 recruiting violations by the NCAA. But the team seemed to be pulling itself together, booting the shady coaches, installing a new Astroturf field and gearing up for a new season and a new future.

The crash was a devastating blow not only to the University, but to the entire community. Citizens of Huntington likened it to the Kennedy assassination, “Everybody knows where they were and what they were doing when they heard the news.” Government offices and local businesses were closed, windows were festooned with black bunting; this was a community in deep mourning.

The next few weeks were filled with funerals and memorial services for those lost in the tragedy. The most poignant was probably the service for the six football players whose bodies could not be identified, and were laid to rest together at Spring Hill Cemetery overlooking the Marshall Campus.

Then the Herd slowly began to take shape again – a new shape. In March 1971, Jack Lengyel from the College of Wooster in Ohio took on the job as Marshall University’s new football coach. The NCAA allowed freshmen to play on the varsity squad, and Lengyel assembled a team from walk-ons, freshmen, and the nine players who hadn’t been on the plane that fateful night. Lengyel temporarily re-dubbed the team the Young Thundering Herd until it worked its way back up to a four-year class structure.

The Herd began a run of winning seasons starting in 1984. In 1987, Marshall played in the NCAA division I-AA playoff, and in 1988 won the Southern Conference football championship. The Herd moved into division I-A in 1997, and 1998 won its first bowl game.

Even after more than 40 years, the 1970 tragedy is still not forgotten by the residents of Huntington, West Virginia. An annual memorial service is held at the Memorial Student Center fountain. After the service, the water is turned off until the coming of spring.

The tragedy and eventual triumph of the Marshall University Football Team has been immortalized both in film and in print. The movie drama “We Are Marshall” and the documentary “Ashes to Glory,” along with the book “Real Tragedy, Real Triumph” all are worth a peek if you want to dig deeper into this heart-wrenching, yet inspiring, story.